I've re-iterated time and again my gaming start with AD&D back in 1989 just as Second Edition was coming out. The first time I was consciously aware of 'D&D' was the old cartoons when I was a kid, I would have been 7 or 8 when these started to air but I never made a connection to the RPG till a friend introduced me to the game. This probably had to do with the fact that I was going up in area of a French town in Quebec where there happened to be a Canadian Air Force base.  There just wasn't a lot of exposure to English books in stores when the province is French and while D&D might have gotten some material translated in French, casually stumbling upon them in a bookstore is a whole different issue.  ;)

Of course, this changed when my family was transferred to a base in Germany.  I know... seems contradictory that this would be where I discovered D&D but there you have it.  Actually, I suppose it was a 'perfect storm' of factors (I'll get to those elements later).  However, being relatively bored and now a teenager in a foreign country, where there isn't much TV to enjoy and a cutting edge computer being only a 086 XT system running MS DOS 3.x all in CGA (4 color) glory, I'm looking for something to do in a country where I really don't know anybody upon arriving.  So, what does one do?  Well, picking up a good book always helps and I did just that.  Most of the books I got at the bookstore on the base which sold mostly English books (and some French) for the members of the military and their dependents.  Off-base, you had housing set up for various military families along with schools and such as well as other amenities and conveniences such as the equivalent of a 'corner store' who also sold a handful of paperbacks.  It was one of these paperbacks which set me on the proper path of gaming.

I picked up a book which was essentially a French translation of a Fighting Fantasy title entitled: "L'Odyssee d'Altheos" (original title in English being the "Return of the Wanderer").  By this point, I already was familiar with the format of a Choose Your Own Adventure style book but this one was different.  You had hitpoints and used dice and you could die if you were unlucky in combat.  This particular book was also steeped in Greek Mythos which also appealed to me greatly which is what led me to pick it up.  I *loved* it.  In the months that followed, I got more of these books -- all of which were French translations and, due to our proximity to the German/French border, I didn't have any problems getting my hands on more.  When I started meeting new people and making some friends, I was shortly introduced to D&D and, admittedly, those French translations of Fighting Fantasy titles got set aside in favor of gaming with my new found friends.  Simply put, D&D blew me aware since it was a chance to play a largely 'unscripted' version of Fighting Fantasy but with other people. 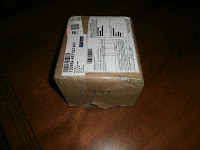 Now truth to tell, I haven't though about some of these adventure books in years.  I also parted with most of them some time ago though I still have a handful.  This past week I was very fortunate to receive a wonderful gift which brought all this to mind once again.  A friend sent me copies of the old TSR Greyhawk books and, while I was expecting these, I did not expect what he threw in to package as well.  There were gaming books included in the package -- two of the D&D Endless Quest books (I used to own one entitled the Circus of Fear) as well as two of the AD&D Adventure Gamebooks.  I never owned any of the AD&D Adventure Gamebooks but these were closer to the spirit of the Fighting Fantasy books as opposed to the Endless Quest ones which were truly of the Choose Your Own Adventure type.

In any event, to look at me at that moment would probably be akin to watching a kid opening up his presents for XMas.  Bill, thanks a million for the books, the smile you've brought to my face, and reminding me of some good and happy memories!

Now, a slight postscript to all of this: 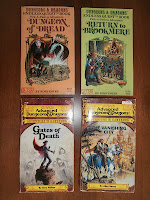 As I was writing this entry on and off as time allowed this afternoon and evening (we had some company over), I do what I always do.  I periodically check the blogs, facebook, and google+.  I came across a post talking about Tin Man Games and their Gamebook Adventures.  What started as mere recollection and fond memories has me now playing some of this stuff.  You see, Tin Man Games essentially produces these sort Fighting Fantasy adventures for the ipad and android devices as well as Mac and PC support.  You may ask, why would I be interested in such a thing?  It's not just an ebook... but an app / game.  Iyou create the character with it, you roll virtual dice which you see drop onto the page as well as links for the decisions you decide to make.  In short, it takes care of all the tracking for you so that you can just read and play be it on phone or tablet or computer.  Isn't that just awesome?

Well, that's it for this weekend... some work did get done on both the Hide in Plain Sight module and the Mystery at Morfurt module.  Up next is more mapping for HIPS as general editing and layout continues for the Morfurt adventure. 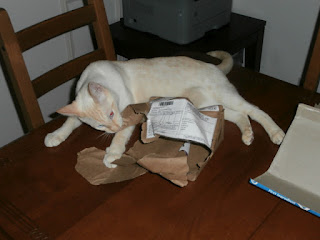