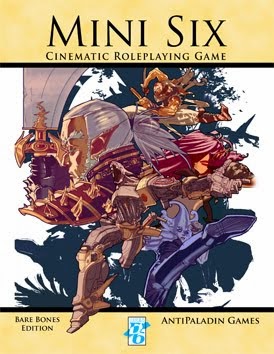 I enjoy the d6 system and have said as much on repeated occasions.

My first foray with the system would be though West End Games' classic Star Wars RPG at a time when I truly got fed up with TSR and their bloated publishing schedule and, what I perceived as schlock, being produced.  This would have been around the mid-90s.  The Star Wars RPG (and d6 in general) was easy to grasp, quick to learn, and fast to play and the rules were light enough to allow the freedom and flexibility for a narrative and cinematic experience.  It was also the first 'bucket-full of dice' game I played, a symptom usually associated with dice-pool systems.  I think I just liked rolling many dice but then, which gamer doesn't?

My initial foray as a character in the Star Wars universe was a brief one... he ended up dying in a cockpit of an A-Wing but it was an experience I remember fondly.  It would be a few years later that I ended up trading a deck of Magic cards (my primary play and tournament deck at the time) in exchange for ten Star Wars RPG books (all hardback rulebooks save three of them).  Within a few years from that, my collection grew by leaps and bounds as I was able to get a lot of those books severely discounted. 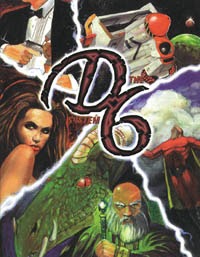 By the end of the 90s, West End Games had lost the Star Wars license and ceased producing the game but fortunately, they had also managed to release "The D6 System: The Customizable Roleplaying Game" before eventually going into bankruptcy.  It got basically bought out afterwards, and three generic d6 books: "Space", "Fantasy", and "Adventure" were published.  From this, there was also a big push to essentially restore West End Games and this was called "Septimus".  A couple of years back, I wrote an article about it which can be found HERE but things just didn't work out as planned.

In what almost seems to have been an act of contrition with the failure to rise from the ashes, the last act of West End Games was to declare various works as System Reference Documents and release an Open Game License for the D6 System knows as OpenD6.

And this brings us to Mini Six.

While Mini Six is not the first distilled rulebook for the D6 System, it it perhaps the shortest, and best streamlined and accessible version of the d6 rules you can get.  Including the OGL, the book is 36 pages and almost a third of those pages are just sample settings.  Simply put, Mini Six is an excellent distillation of a rule set made popular by the Star Wars RPG which, for some, is still the best rules incarnation of the license.  I will admit that the current FFG ruleset is pretty damned sweet though.

Obviously, with a rules light system there is a lot of room to throw in a few things to make this rulebook a functional and versatile one.  There is enough samples of critters and people along with vehicles to fill basic needs.  Weapons and Equipment is equally streamlined and was always something which tended to be on the 'simple' side however, it works very well for the scope of this book.  As for stuff that might not be in the book, the system itself is simple enough and examples are ample enough to allow for someone to create what they need for the game.

As such, the book as-is and the system being easy and quick to learn and play makes Mini-Six a great ruleset for an extended campaign or just the one-shot.  It give a bit more 'crunch' than "Fate: Accelerated" and will feel more familiar for games who have played various pen and paper based RPGs before.  Obviously, Mini Six won't be perfect and you can't expect it to have EVERYTHING but it has everything you would want to build upon.

While I praise Mini Six, I'm afraid that I am somewhat hesitant to deliver the same praise to AntiPaladin Games.  I am fortunate enough to have gotten my hands on a physical copy via Lulu and, while this took a long time to actually happen, at least it was always available as a free download from their site.  Presently, there is no way to get a new printed copy of the book.  The free links have been removed but, at least it is available at RPGNow! (OBS) over HERE.  It is a 'pay what you want' with a suggested price of $2.00.  As for a print product, it will eventually happen but there is an uncertainty when this will actually happen.  The last time they promised a print copy, it took a few months for it to show up on Lulu but I'm hoping that transitioning from Lulu to RPGNow for POD won't take anywhere near as long this time around.  However, at 36 pages, it shouldn't be too bad to get the file and have something printed yourself if you are the type to want something tangible and just can't wait.

I've had the fortune to play Mini Six more than once in the past few years and I'm sure it will happen again this year.  Mini Six is a great little rulebook and system and if you only ever get one D6 related book, this one is certainly worth considering.