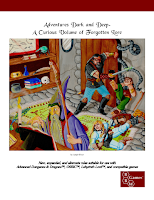 I was first drawn to the Kickstarter effort because of the premise of the project.  I do like the charm and occasional quirks for Advanced Dungeons & Dragons and adore reading that good ol' Gygaxian prose.  It is very fitting to have this volume released so shortly after the special reprints that were just released less than 2 weeks ago.  The book, "A Curious Volume of Forgotten Lore" is part of the "Adventures Dark & Deep line" authored by Joseph Bloch and really explores the direction and presents material that *might* have shaped and formed the basis of a Second Edition created by Gary Gygax.  The material is drawn and inspired from some articles written prior to his departure from TSR as well as many sources in the years that followed.  Simply put, there is a lot of things to like in this book and Joseph Bloch, well known for his Greyhawk Grognard blog and the 'Castles of The Mad Archmage', does a great job in putting it all together.

So that said, what do you get in this book?  Well, there are new classes and subclasses (5 in all) as well as a secondary skill system, alternate combat mechanics, as well as sections on ships and sailing, an expanded section on magic, as well as one on game environments.  Obviously, you also have a host of new spells, items, and monsters to play too.  A decent selection of material for a 135 page book.  Of course, it is important to remember that this is a supplement to the AD&D books or other games with similar functionality.  You can't run a game with just his book alone.  However, there is enough additional material in this book to make it an indispensable resource to have alongside the PHB, DMG, and MM.  The material on ships, magic and the environment alone is worth having and take up about a third of the book.

Other sections will please different people a lot more... the new classes are fun to at least look at and I'd be tempted to try a couple of them out.  The combat section is something that I could have done without but only because I'm familiar with other systems that have also taken a step beyond some of the ideas presented in AD&D.  There are STILL some neat things though and all the material in this book deserves a good read-through.

I would love to say that the book is perfect but it is not without its little flaws and shortcomings.

Fortunately, most of these have nothing to do with the material, but rather how it is presented.  There is TOO much wasted space for my liking.  I mean, it's OK to have some white space here and there but I can't ignore that fact that some of these spaces are wasted opportunities for other art or laying out the text in a more efficient manner.  The section on classes have 2-3 pages potentially wasted because of how the text was laid.  I do realize that the reason for this was the decision to only start detailing a new class on a new page but, given that the original Player's Handbook didn't bother with this luxury, I'm fairly certain that the fans wouldn't have minded if this book followed suit.  Naturally, none of this reflects badly on the actual book but the small lonely chart on page 27 (one column width and only 9 lines in the table) does leave the majority of the page blank and does make it look a tad out of place.

The art in the book is fantastic though -- a great old school vibe from the interior as well as the cover art piece.  I just wish there was a bit more of it, or that some of the pieces were bigger.  Actually, this could have really helped with some of that extra white space I see when going though the book.  However, I do understand that art can be expensive so that may explain a thing or two.  I should add that there is one single, full-page piece of art which is a great illustration (on page 118) but it's also the ONLY full page art piece in the book.  A real shame there isn't more, larger sizes.

Art and overall layout and presentation is a very subjective thing though and I know that some people just won't care.  Aside from that two things, the book itself is a fairly solid offering.  I only found one little issue when going through it earlier this evening and I sent Joseph a quick note so that it can be corrected before this goes to print.

As a PDF (available at RPGNow and Drivethru), it is certainly worth the $10 if you are looking to supplement your AD&D game -- especially if you've also gotten some of the reprints (or looking to start back into AD&D).  I do have to say that the prices for a physical copy (once they become available) might be a bit harder to justify.  As a Kickstarter backer, I pledged $30 for a softcover (perfect bound) copy though that entitled me to the PDF as well.  For $60, I could have gotten the same thing but in Hardcover.  Given that the Premium Reprint of the AD&D PHB cost $35 for a 128 page hardback ($45 for the 240 page DMG reprint), I do find the prices a tad overpriced for what is offered  -- especially if this ends being produced via POD.  I don't know if the prices will be adjusted one physical copies become available though.  My advice is to get the physical books if you KNOW  the physical book is going to be used.  Otherwise, the PDF may be the best best.

In summary: A fascinating volume which may bring more to your gaming table than the original Unearthed Arcana did.  This is not just another published House Rules document and certainly worth a look if actively engaged in 1st Edition style game.