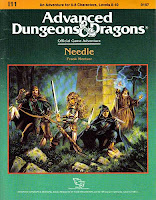 When reading the various blogs I follow, there was an interesting post HERE on technology (found on the Tartarus Press blog). This post like many others that have been written elsewhere talks about the interesting and occasional blend of 'futuristic technology' in the fantasy game. A couple things come to mind when I see this:

1) Sci-Fi and Fantasy can be a lot closer related if one just knows where to look or what to read.
2) I11 - Needle

Frank Mentzer wrote what I consider to be an unusual gem of an adventure when 'Needle' was assembled and published in 1987. I was fascinated by the module and it was one of the first in the Intermediate Series (I-Series) I bought and I ran it as soon as I could which did take a couple of years so that the party were of sufficient level. It wasn't till many years later that I learned that this was originally set up as a three-part tournament module for GenCon back in '84. What I also find interesting was the subsequent shift in newer materials published after 1987. You see -- technology plays a small and mysterious role in this module as other modules TSR published for AD&D and D&D before it but a lot of that seemed to disappear entirely with 2nd Edition. That's not to say there was a heck of a lot but it helped D&D stand out from 'regular' fantasy in some ways. Tolkien never introduced a laser pistol in his books but that didn't stop it from happening in published campaign modules for D&D.

I have always found that there was a certain charm to Needle though and, in essence, it isn't a complicated adventure but, by the virtue of its original design, nicely divided into three sections which can be played continuously or even broken up over a series of other adventures and events if the DM so chose.

In part 1, the party is sent on behalf of the king to explore the ruins and 'magical' obelisk of a far-away land. This part includes traps, puzzles, a maze, and an encounter with technology -- all which culminates in being able to lower a force field protecting the obelisk.

In part 2, the party is ordered to assist in the retrieval of the obelisk and, as they are forced to deal with the harsh conditions within the jungle, they also have to contend with the natives which are becoming a problem.

In part 3, the obelisk which is now in the king's possession begins exhibiting strange properties and a doorway or sorts opens up at its base. Guess who the king decides to send through. ;)

Now, some people genuinely don't like this module since it's a bit too quirky. Add to that the fact that the doorway is a portal to the moon where you mean a lot of super friendly, intelligent, giant, talking, spiders who are willing to engage in trade negotiations provided the party can prove themselves. Something about defeating a special dragon in order to free some friends. That bit *might* be a bit much or a bit too weird but I find it genuinely worked!

My players had fun with it and despite the module having boxed text for reading to the players, I didn't allow myself to be constrained by it and had fun role-playing the spiders (known as the 'Chak')

Now, I've always like Frank Mentzer's stuff and I really enjoyed his influence which is so prevalent throughout the BECMI box sets and his material really represents a specific era for TSR and D&D -- at least for me. Up to a few years ago, WOTC was even offering the electronic copy of the module for free. Sadly this is no longer the case. One can maybe hope that with the limited reprinted of the 1st Edition books coming out VERY soon that they will (at least for a limited time) re-release all that material including I11 once more.

As for finding a used copy, well the good news is that it isn't the most sought after module. The bad news is that prices tend to start closer to $15 these days for a used copy which some may find a bit pricey for a 48 page module which originally retailed for $8.

But I like it and I think I'll be running it again at some point in the near future!