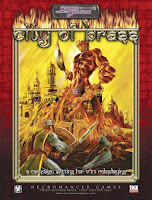 The earliest time I saw mention of the City of Brass in AD&D was the article penned by Ed Greenwood entitled "From the City of Brass to Dead Orc Pass". This article was found in the pages of Dragon Magazine in May of 1980 but was reprinted (where I first read it) in the Best of Dragon Magazine - Vol.2. Since that point, I had seen mention of it over the years in a couple of products inspired from "One Thousand & One Nights". As cool as it was, it was not something I ever delved into and when Necromancer Games brought out this wonderful looking box set, I initially passed on it due to pricing. It was not until 4th Edition D&D was announced that my FLGS decided to try and clear some of the d20 material which included a host of products from Necromancer Games.

Now Necromancer Games was a game company I grew to like very quickly but, was one I came upon after I put 3rd Edition behind me and started playing C&C. I started acquiring some awesome looking adventure modules as well as some books such as "The Tome of Horrors". The company's motto was '3rd edition rules, 1st edition feel' and they succeeded very well with what they put out over the years. Sadly, due to restrictions of the Games System License for 4th Edition D&D, the "City of Brass" represents one of the last products that Necromancer Games produced.

The set was initially priced at $70 and, even at the discounted price (it was half off), I chose to pass on the set. Instead, I picked up a copy of the "Wilderlands of High Fantasy" boxed set and the "City State of the Invincible Overlord" hardback. Together, those two set me back a mere total of $50. If you are at all familiar with NG's treatment of the Wilderlands here, you know and understand the deal I managed to get! I went home with my purchases but, I really started to second-guess my decision to pass on the "City of Brass". After considering it, I went back to the store that very same day and dropped another $35 for it. Sure, it proved to be an expensive day but, we are still talking about a $90 savings in total!!

I got back home, and then came the unboxing. The City of Brass was a *heavy* box set but as far as quality is concerned, even at full price, it would have been worth every penny. Between the 4 books in the box set (1 of which is a map booklet), you have about 500 pages of material. The box set used is of the sturdiest and highest quality that I have seen in any other RPG box set (save NG's Wilderlands Set which is the same type). Simply beautiful...

But what is the City of Brass? To quote the description at RPGNow:

City of Brass. The name conjures visions of magnificence and splendor, of mystery and timelessness. A place of wonder, a fable, an enigma, a magical fortress adrift in a sea of flame under a sky of fire, a fantasy and so much more. A bazaar at the crossroads of the universe, the City of Brass has long been rumored amongst mortal folk to be a repository of relics both fantastic and foul. Here is a place where your greatest dreams and worst nightmares may be granted you with a Wish if the price is right.

As far as content goes, the box set is just full of flavor and a represents a setting which can be used and explored for years in your campaign. While I wasn't sure of the use and appeal initially, there is enough material and ideas to spark the imagination and create a desire to play with it. The first book details the city and region (in the inner planes as far as D&D cosmology is concerned) with the second book continuing to detail areas and providing adventure material. The third book is really where the majority of the crunch is found which, as mentioned before, is 3rd Edition. The third book isn't a complete waste though as there are 100 adventure seeds given towards the end of the book. Still -- this would have been easily half the size if the crunch were done for something a bit more rules light. Of course, this also means the the first two books, representing 240 pages is largely stat-less and usable with pretty much anything. The last book, or rather booklet, gives maps for the setting. While only around 24 pages, it does the job but the set has no other maps of any sort (no fold outs).

I really don't think there could exist a better treatment for the mythical City of Brass and the only improvements that could be made would be to further customize it to better fit other systems -- something which will never happen of course. It's certainly a great product but to use it for a game other than 3rd Edition makes it harder to justify full retail price. Looking at Noble Knight games, they have a couple used copies selling for $70 and a new (still in shrink) copy selling for $10 more. You can buy the PDF copy for $40 and they offer POD softcover options (a single softcover as opposed to a box set of 4 books) for $70 making the pricing out of whack for something like this. If you see it marked down, it is worth considering (especially if you are as lucky as I was) as it is a very nice set.

Now, while I have gone read various bits of the set on and off the past few years, I sadly have yet to take my players to this setting but I had planned to after a time spend in Freeport (one of my campaigns anyway). I look forward to the trip.