Weekend R&R: The Crucible of Freya 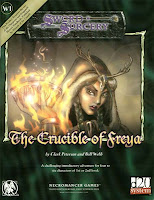 My first exposure to a Necromancer Games product (I have already talked about a couple others in my Weekend R&R series), was 'The Crucible of Freya'.  This module was a fantastic, thought not at all complicated, adventure module.  It presents an adventure goal and introduces the objective by using action to engage the players.  A chase ensues and the party follows the raiders to an abandoned keep to secure an important relic that was taken.  If the party it diligent, they will also stumble upon a much older source of evil in the depths of the keep.  It's a simple, fun, and potentially deadly introductory adventure.

What was particularly nice was how the adventure module itself is set up.  The earliest part consists predictably of the introduction and adventure overview.  All Necromancer Games products provide great detail to things that can be used to link up with other adventures and campaigns that can tie in to others in their line though never anything which proves to be a necessity.  There was also a free adventure which ties in directly to this one which could be used to bring the party to the town which is detailed in this module.  Needless to say, a nice touch.

The next part talks about the area where the adventure takes place... it provides the usual fair such as a random encounter table but also provides lairs in the area which can be stumbled upon if the party is given to exploring. Small scenarios are provided for these lairs to give the players a better sense that encounters are well planned and prepared as opposed to just randomly rolled up.

This section then details the town and it's NPCs before moving on to detail the abandoned keep.  At this point, veteran GMs and old-school fans would have all they need to go on (along with the supplied maps) to run the adventure.  The overview and introduction paints the scenario and with the information provided for the town, people, and keep, not much more is needed.  However, some people prefer a 'guided approach' for their players and a bit more structure to their adventure to run it successfully.  This is why the next part provides boxed text for narrative purposes and a step by step guide to take the story from point 'A' to point 'Z'

The last bit of the module consists on providing suggestions for future adventuring possibilities and, given that this is a 3rd Edition product, more crunch.  As can be expected, you would save a few pages if this was done for a different system other that 3.x but it is what it is.

The adventure is a great module and the production values are quite nice.  It was also a product that at a MSRP below $10 when it was first released ($7.99 to be precise).  Of course, the best part is that it is still very much available and inexpensive today.  A used copy from Noble Knight Games will cost between $4.50 and $5 (depending on the condition).  A PDF copy from RPGNow is only $3.50 but a new physical copy (POD from RPGNow) will not cost more than the original MSRP and you can get the PDF with that as well.

But now that Frog God Games has unrestricted access to all this older material, maybe we'll see a 'revamp' for S&W.  :)