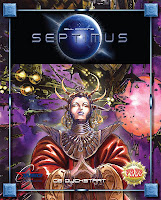 Sorry if this edition of the R&R is a day late but it was a busy weekend.  I finally got a chance to see 'Prometheus' and I had a lot of fun with it.  I do love Sci-Fi and as any Sci-Fi fan knows, not all Sci-Fi is created equal.  Of course, I'm not talking about the ol' Star Trek vs Star Wars tropes either but, generally speaking, some of the best Science Fiction is just an exploration of the human condition.  Past, Present, and Future, regardless of the level of technology available, a person in that universe will still have to contend with challenges of everyday life.

As fun as the movie was (I won't go into reviews or comparisons), I did think to myself the kind of Sci Fi gaming I've done over the years.  I've always been generally more fond of a Fantasy type of RPG but I quickly realized that Sience Fiction is not a genre I have indulged in very often despite my love for it.  Of all the games I've played and hours devoted to any particular game, the longest (or rather most) I have played with any Sci-Fi game was simply, West End Games' Star Wars RPG.  It was fun and fast paced and I've enjoyed playing and running the game.  Traveller, a game which I would love to play, is sadly one that just sits on my shelf.  I'm almost ashamed to admit it took me MANY years before I picked up some Traveller but, at least it was an incarnation (a reprint) of the original game.  I can't consider my experience with Mechwarrior as counting much either since we pretty much just defaulted to Battletech and played at destroying each others mechs on a battlemap.  I have done some Star Trek... but little.  And, I just can't can't Shadowrun though it was a lot of fun.

So, given my experience with WEG's d6 system, I was extremely excited when Bill Coffin's 'Septimus' was announced.  Coincidentally, the Septimus Quickstart was also part of the first 'FreeRPG Day' that was held back in 2007.  Unfortunately, due to WEG practically imploding upon itself, we came close to not seeing ANYTHING further on Septimus.  When I first got my hands on the Quickstart, I genuinely thought that WEG might be able to start and turn things around.  It was an attempt to provide a alternative Sci Fi setting and pair it to the d6 system best know for Star Wars -- a license which WEG no longer possessed.  Some of the premise proved interesting.... Septimus itself as a Dyson sphere and a focal point and seat for an empire that was fading.  Personally, I saw great potential even though I had very little to go on.

Now the saga of WEG in the past few years is largely an interesting story of decline and it's a shame that this project was impacted.  At one point the project was even cancelled only to be revived and released through POD as WEG made the d6 system available under an Open Game License.

The Septimus project suffered, it's over 350 pages but there is hardly any art.  The setting material is fairly extensive but the underlying system is very familiar to those who have played the original Star Wars RPG.  I suppose that, for this reason alone, Septimus might have been worth considering had it not for the WEG decision to offer the various core d6 material also for free -- such as Space d6.  You can get a variety of the old WEG product line for free and Septimus is also included amongst these if you look for them on RPGNow.  If you want a POD copy, you can google to find a Lulu link for it though I would have difficulties recommending that course of action.

At the end of the day, Septimus is an interesting setting built on a tried and true system which, is not without it's limitations.  Septimus is a great resource to mine ideas from for the development of a Sci Fi universe that you want to explore and create.  At the same time, the setting can be tweaked to provide some interesting gaming experiences -- especially when you visit Septimus after the inhabitants have come and gone, perhaps only leaving a few mysteries.  I think this is why I still have a soft spot for the setting actually -- the potential for mystery if it is spun 'just right'.  Much like how the movie Promotheus presents a few mysteries for new comers to explore and contemplate.