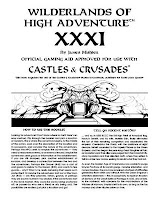 With a recent discussion on the TLG forums concerning various properties some of the fans would love to see get the C&C treatment, the Wilderlands came up.  I smiled and, at the same time, was a bit dismayed when I saw this suggestion come up.  You see, I kind of like the Wilderlands.  Actually, I really like the Wilderlands.  However, I was never fortunate enough to find out about these products and the Judge's Guild till a few years ago.

Yes... I am really sorry about that.  I recognize it is a massive oversight but, when I started into the hobby, it was with a small group of friends I made when my family were posted over on a Canadian Military Base in Germany (my father was part of the RCAF).  In some ways, we were lucky, the small bookstore on the base carried some gaming material but 95% of it was AD&D and D&D.  To be honest, I don't recall gaming material that wasn't put out by TSR.  While I was able to get 1st and 2nd Edition books with relative ease, dice proved to be a bit of a challenge and other gaming publications were very rare.  In short, I was never really aware of Judge's Guild and, admittedly, I somehow got the idea in subsequent years that if it wasn't 'Officially produced by TSR', it was crap.

What can I say?  I was young and foolish all those years ago.

So, as it turns out, my first introduction to the Wilderlands was thanks to James Mishler -- a writer who I came to have a lot of respect for.  A few years back, he started up a small company called Adventure Games Publishing and back in 2007, he released his first release (not counting the Free RPG Day contribution) entitled simple 'XXXI'.  The title was in reference to the 31st anniversary of the founding of Judge's Guild.  His plan though was a subscription based model to present a vision of the Wilderlands termed simply, the Wilderlands of High Adventure.  Due to a variety of reasons, some of which I have discussed in the past, these plans simply didn't pan out.

Despite that, his enthusiasm and writing about the Wilderlands turned me onto the setting and caused me to seek out various Judge's Guild materials... I picked up the d20 adventure conversions by Goodman Games (there were 3), the material that Necromancer Games put out (one box set, one hardback, a softcover accessory, and an d20 conversion of an adventure).  I also tracked down a whole bunch of original Judge's Guild material.  I can't tell you how surprised I was when I saw how cheaply these would have been produced given the physical quality.  But I just didn't care.

Misher's 'XXXI' though remains simply fantastic!  It's jam packed detailing the town/outpost of Tell Qa which can easily be dumped in other campaign settings.  It's got some history, details locations, npcs, new races and a new class and a cool map... The material spans 48 pages and I just love it.  'XXXI' was my first Wilderlands-related product but it was far from the last.

AGP, was one of the first 3rd party publishers to support C&C.  The only other company at the time was Goodman Games who went on to do 5 modules (4 of them converted from the DCC line and 1 of them original).  Sometime afterwards, Green Ronin entered the fray and (aside from the Arcana Creations and Brave Halfling Publishing partnership), only now is there a new 3rd party publisher attempting to release a product for C&C -- a conversion of 'Bluffside: City on the Edge', a d20 product by Mystic Eye Games released in 2002.  AGP sadly is no longer around and it was closed down since its continued existence was not really financially viable.

The only good news is that the PDFs still are -- including 'XXXI' (direct link HERE) which can all be found under the Judge's Guild products up on RPGNow!  The PDF is $9.00 which some may think a bit pricey for it but, I still think it's worth it.

I can only wonder at times what could have happened had AGP gotten a bit more support, and had AGP did a few things differently.  I still don't think it was any singular issue but a few.  James Mishler has acknowledged the mistakes he made with AGP but I think the way the direction the market was going as well as the economy did it's fair share of collateral damage.