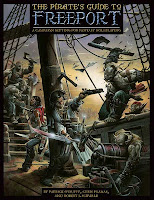 Back at towards the end of the 3rd Edition line, third party game companies began to prepare themselves for the inevitable and the very real possibility that they would need to adapt for the transition of a new edition for D&D.  Wizards of the Coast confirmed rumors in the summer of 2007 with a launch the following year.  Green Ronin, who enjoyed success as a third party publisher of d20 material was well underway to making some changes and released a wonderful campaign setting book entitled the "Pirates Guide to Freeport".  It was also released in the Fall of 2007 and was based on the numerous d20 adventures which took place in the same setting.

Freeport is a chance to do some good ol' fantasy swashbuckling with a hint of a Lovecraftian twist.  It isn't the pirate theme that makes this book stand out on it's own though.  What makes this book great is that it is entirely system free.  It doesn't even have a light 'sprinking' of game system crunch ... it is genuinely and 100% free of any of this sort of thing.  Green Ronin decided to start a line of campaign supplements with zero rules in order for people to feel free to pick them up and use them for whatever game system they preferred.  In order to fill in and supply what could arguably be deemed as 'necessary' to successfully run the setting as was detailed in the book, they released a series of companions to the books.  For this particular book, they released a d20 version, a True20 version, a Savage Worlds version, and a C&C version (though the C&C version was only released as a PDF).

The book itself is concise enough and provides more than ample information to successfully run an extended campaign in the city of Freeport.  It povides a history and details life in the city and gives information of the various 'movers and shakers' and places of interest you'll find.  The book also gives a rundown on the various areas around the city but given that this is largely centered on the one island which is part of a small chain of smaller islands, it makes dropping this city in most settings relatively easy.  Most chapters deal with different districts of the city though and peppered throughout the material are plenty of adventure ideas to spawn countless hours of fun and exploration.

The book itself is very nice though the majority is in black and white with the exception of Chapter 2 (which is an overview of the city) and the inside cover which features a color map of the city itself.  I have to say that it is a shame that the rest of the book isn't in color like the second chapter as I think the color really makes the art stand out amongst these pages when compared to the rest of the book.  Then again, doing it this way probably helped keep the price of the book lower than it would have been had it all been in color.

My own experiences running Freeport thus far has been a bit briefer than I would have liked.  After countless adventures and brushes with curious events surrounding the village of Hommlet and the various perils and loss of life during the Saga of the Witch Queen, my campaign led to Freeport for a change of pace.  The players genuinely loved their stay there and this is where one player remarked my GMing style shifting from a 'Michael Bay' approach to a 'Hitchcock' vibe.  Maybe it was the Yellow Sign.  ;)  It was fun and, if that campaign ever picks up again (it's been on hold for about 18 months now), the players will resume their investigations and adventures in the city of Freeport.

I really did enjoy looking through and reading the book... the writing, art, and overall themes are just plain fun.  Get the Companion Guide for it, and you get the crunch with some interesting critters and magic to go with it which is basically just the icing on a really tasty piece of cake!

The book is a 256 page hardback with a MSRP of $34.95 though the Green Ronin site lists it as $29.95.  It's possible that subsequent reprints were less expensive or Green Ronin is simply discounting the price on their site.  Noble Knight Games matches this pricing though they have a used copy discounted another $5 off.  The PDF of it is $19 and both PDF versions and physical copies are readily available if seeking a copy.

Since the release of this book, Green Ronin has done a couple other sourcebooks in a similar, stat-less style -- Cults of Freeport and Buccaneers of Freeport.  I don't actually have either of this though I was tempted to.  Unfortunately, instead of an attractive hardcover, Green Ronin opted to do a softcover edition instead and, given that my time in Freeport was never meant to be 'longterm', I felt I had more than enough to go on with the main book, the companion, and plenty other of material I have from other companies which could just as easily be sourced from if I needed some inspiration.