How to use Chaotic Shiny's Tavern Cards 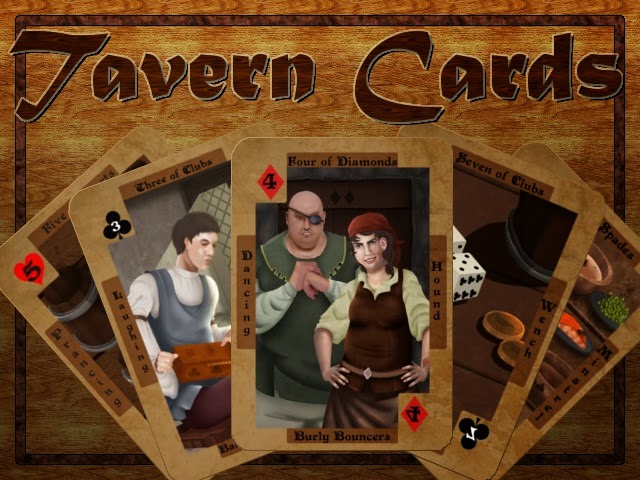 About a year ago, Hannah Lipsky had a project she launched on Kickstarter.  The goal was to create a full deck of playing cards that could also serve to randomly generate a tavern.  The Kickstarter struggled a bit but did manage to get the necessary funds to go ahead and create the project.  Now, the backers of the project have started receiving their rewards.

The cards are of a nice quality and showcase 55 different pieces of artwork (56 if you count the back of the cards) but does not come in a box.  This shouldn't be news to anyone who backed it, Hannah was very upfront about everything throughout the campaign and the months that followed as the project progressed.  The one thing that the deck didn't include is instructions on some of the ways to go about using the deck.  Aside from just a regular deck of cards that is.

To be honest, there is no one 'correct' way to go about doing so and, chances are, if you backed the project, you probably already have an idea.

Each card have common features about them.  Obviously the suit and number of the card -- Aces through King in Hearts, Clubs, Diamonds, and Spades plus the Jokers.  Each care has a descriptor (an adjective) on the left hand side of the card and an object (a noun) on the right side.  The top of the card had a word or two to indicate some sort of feature for the in. 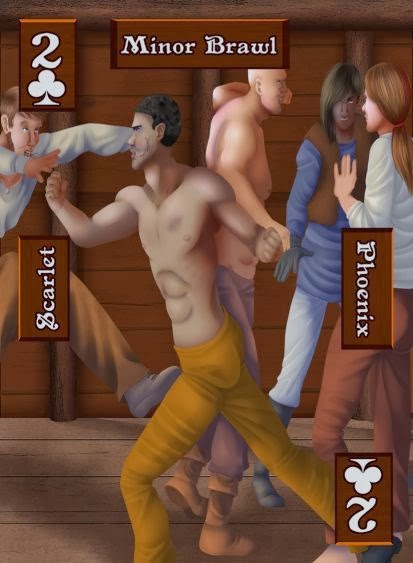 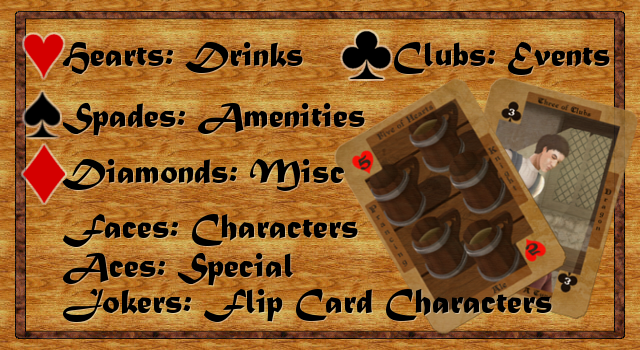 How to Use Them:

Some of the better ways to use the card if you are prepping ahead of time is to deal out a series of cards.  My suggestion is to keep drawing until you have at least one of each suit.  This means you will have a minimum of four cards to play with though the odds are you'll have anywhere between 4 and 8 cards.

Doing so right now, I pulled 8 -- 3 diamonds, 3 spades, one club, and one heart.  It only takes two cards to come up with a name and using the first two, we have the 'Charming Wyvern'.  Looking at the spread, I know that the Charming Wyvern has some stables, is known for it's lavish meals (breakfast AND dinner), as well as it's wine.  It certainly sounds like a classy establishment.  Of note this particular evening, there is a noble woman in the company of a young man likely enjoying each others company but the evening is cut short when a minor brawl breaks out due to the results of some unwise bet.

And there you have it.  There is no 'set way' to use the cards but it's important to see one of each suit make an appearance in the spread to make sure you have a variety of elements to pull from.

If you need to use the deck of cards during the course of the game, it might actually be easier to separate the cards in their respective suits before hand.  That say, if you need to draw upon a particular aspect of a tavern, it will be readily available as opposed to continuously draw till you find one that works.

I imagine that, once things settle down, these will become readily available at DriveThruCards at Chaotic Shiny's store front HERE.  I don't have a price since it isn't listed yet but, judging by the Kickstarter, it will probably cost you around $12 give-or-take.  As soon as I find out they are available, I will let you folks know.  I think these turned out to be pretty cool.