For those who know me or have followed my blog for a while, the news that I have been into the miniatures aspect of the gaming hobby not all that long ago compared to my involvement in RPGs.  I only started painting my miniatures about a year-and-a-half ago.  In the five or so years that preceded that, my involvement with miniatures was strictly the pre-painted kind, courtesy of the Wizards of the Coast 'Dungeons & Dragons Miniatures'.  I started using miniatures simply to facilitate the visualization of combat for a couple of the new players I had in my regular game.  I grew to like it and the thing that motivated me to start painting my own was because of the incredible value made possible with the first Reaper Kickstarter.

But knowing little and figuring that I needed the practice, advice from a wargamer who painted his own armies and the convenient proximity of a Games Workshop store from where I worked, led me to pick up a beginner painting kit.  I wrote about the finished goblins HERE.  I was proud of those goblins but with my Reaper order due to arrive several months later, I didn't have much to paint.  I got myself invested a bit more in Games Workshop products, their line of paints, their line of 40k miniatures (Dark Angel in particular), and White Dwarf of course.

I was no stranger to White Dwarf and, at one point, had a handful of issues from the late 80's.  There was content that wasn't exclusive to Games Workshop products but this sort of things was sparse.  Of course, the magazine (still running in double digit issue numbers at the time) is nothing like what we have seen in the past year.  Since I was getting into a lot of things that were Games Workshop related, I picked up a subscription for a year.

White Dwarf helped me get up to speed with all sort of things Games Workshop was doing, the 40k universe, excellent previews and paint jobs of models, as well as paint techniques for specific models they sell.  For a novice, there was a lot the magazine offered me.  Unfortunately, a few months later, with the availability of video tutorials and painting guides on the internet and just getting a bunch of painting done, I found the magazines less useful.

While I enjoyed building up my Dark Angels army, I really didn't care all that much about a lot of the other stuff that GW was pimping.  The ads... so many ads.  Well, the magazine is an in-house product which means it pretty much is an entire ad.  I couldn't care about things like Battle Reports and what new fiction books were coming out, and aside from the pictures and the Paint Splatter series of articles, I was less and less inclined to give the magazine a complete read through.  I am also not the type of person to hold on to their magazines long term either.  I let the subscription lapse.

A month later, I hear that they've changed up the format of the magazine.  White Dwarf was now a much smaller release but it was now a weekly one (for $4 an issue).  It is a showcase of new products and has a lot of things you would expect from the magazine.  Price is significantly lower too.  What was interesting to me was to hear about the new 'Visions' magazine.

Warhammer: Visions is a new monthly magazine which is, essentially, a pictorial.  Nothing more and nothing less.  It's a nice magazine in the sense that the pictures of models have always been stunning in the magazine and, with the first issue having a lot of content (pictures) which were essentially recycled, it has gotten a LOT of flack.  The magazine has not been well received and been termed as a terrible cash grab.  Actually, I have a tendency to agree with the notion that 'cash grab' is synonymous with 'Games Workshop' these days.  Size is an odd one since it is both smaller than the old White Dwarf (a bit bigger than your 6x9) but with a larger page count (over 230).  Text is minimal and can be best described as 'captions' for the pictures (in three languages).  It's also $12. 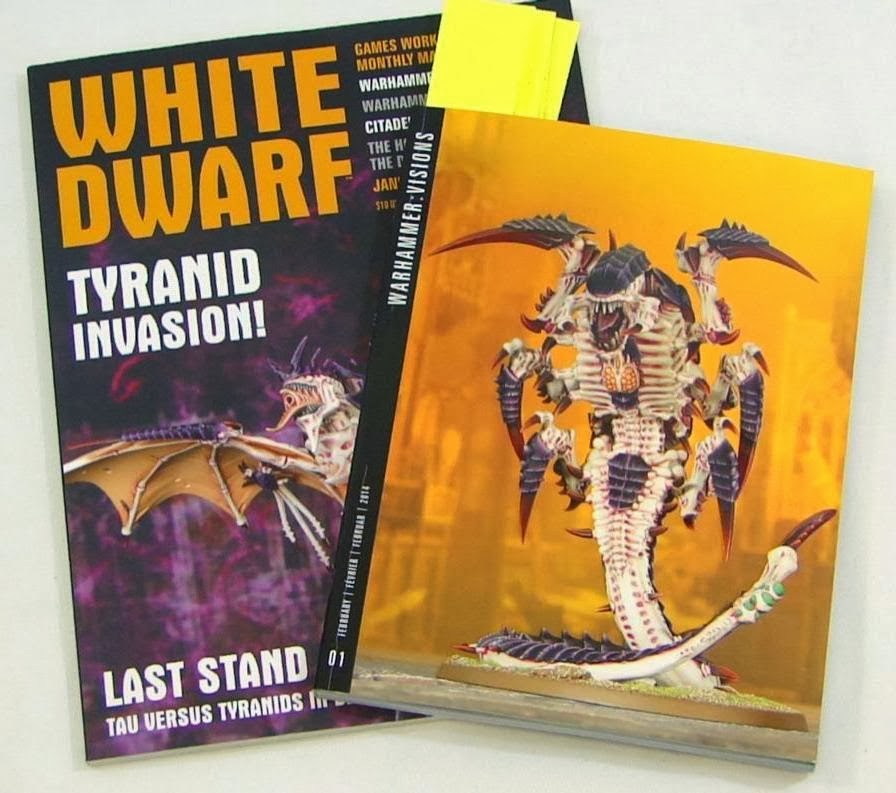 Gone are the ads, prices, and new product listings.  No more letters... no more long winded editorials.  The single, most-useless feature in the new Visions is the Battle Report.  Pictures which have a bit of text setting the stage for the particular shot seem unnecessary even though some of the pictures are nice.

I have always liked the photography and models showcased in the recent White Dwarf magazine but in the last 12 months, I am less interested in what Games Workshop has to offer since, what led me them in the first place was the painting aspect of the hobby.  I liked the painting articles which show me how I can go about getting a particular look on a model.  I liked stuff like the kit bash which showed modified models.  Most importantly, I liked the photographs because it gave me a large sampling of inspiration and examples.  Warhammer: Visions *had* all of this and pretty much nothing else.  The smaller format is convenient for me and, with it's increased page count, I can see me putting this on my bookshelves the way the some people do with National Geographic.  Yes, it's very light on text but I can honestly say that I'm not looking for the articles in this one.  I agree that this sort of magazine won't be for everyone and, if they continue recycle their content from, what is now a weekly production of White Dwarf, I wouldn't mind that either because the chances that I pick up one of those are EXTREMELY slim. As a side note, I should also point out that the many examples of duplication of material in the first issue was not one I had to put up with because my previous subscription to White Dwarf lapsed an issue before they that particular spread.

Is it perfect?  No, but it's got potential.  The one thing that would clearly put this magazine over the top for me (given the $12 price point) would be some Master Class level painting guides and tips.  The existing Paint Splatter is great for people starting to paint or looking for some ideas.  However, as soon as you get an assortment of models done under your belt, some of these basic tutorials are just less useful (though still nice to have).  My own painting has advanced considerably since I started and I continue to hone my techniques.  I am now able to flip through Visions at all the various pictures and be able to tell you was sort techniques and tricks were done to achieve many of the results on display.  If they were to include some 'next level' stuff, I would be really happy to continue buying the new Visions product.

The point is, some people buy Games Workshop for other things than the Warhammer games.  They might like a couple of models for their own fantasy games, or maybe they like or are used to using their paints.  And, while one of the biggest complaints is that there are so many pictures available on the internet for free (well, aside from paying for the access), I don't go out of my way to look at random miniatures online.  Generally, if I am painting something specific, I may look up other pictures to see what other painters have done with the same model.  Visions will continue to give me a broad selection of stuff that I might not be inclined to paint at first glance but these same pictures may inspire me to work on something else or go about painting a model in a different manner.

At the end of the day, it's clear that Warhammer: Visions won't be for everyone.  It's recent and relatively sour impressions it has received might mean that it will be short-lived and that would be a shame.  I genuinely think that people who like Visions won't be the sort that will buy into the weekly White Dwarf release.  I don't think that White Dwarf fans will think highly of Visions either.  But coming strictly as a painter, Visions generally took the best part of the former and dumped the rest.