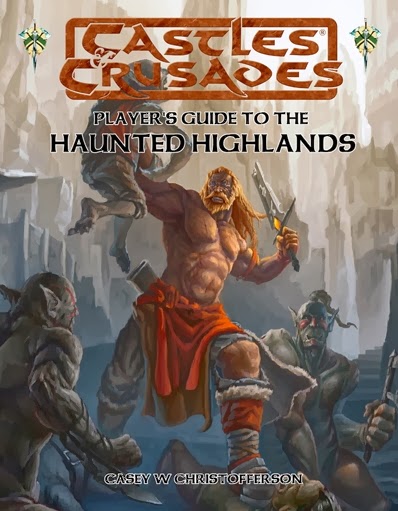 
The Player's Guide to the Haunted Highlands

The book is a modest, 112 page book which basically gives an overview of the new races, new classes, and variants available in the setting as well as basic information about the Highlands.  In fact the first 28 pages is dedicated to the setting and the system specific 'crunch' doesn't begin to happen doesn't start before page 36.

The remainder of the book is clearly divided into 4 chapters though a 5th would have been warranted (and may possibly have been intended).  These are 'Creating the Character', 'Races of Karbosk', 'Character Classes', and 'Dual Classing'.

The first chapter after the overview is on 'Creating the Character' but this a bit of a misnomer.  Sure, it starts off by telling the would-be player to select their class, roll their attributes, and so on but most of the content of this chapter is devoted to an explanation of the attributes, the Siege Engine mechanic and how attribute checks, saving throws, and then how combat works.  The chapter goes so far to go into situational modifiers, combat maneuvers, and even other odds and ends such as Spell Resistance and Turning Undead.  This isn't a bad thing but none of this content is new; it's lifted straight out of the C&C PHB.  When I first heard that this material was going to be in the book, I had hoped that the Player's Guide would be 'self-sufficient' after a fashion.  I supposed it could be if you restricted yourself to the new races and classes there were in this book only.  That would also mean restricting yourself to the new spells listed here too.  However, given what's actually available to play in this book, the inclusion of this material doesn't make much sense, but who knows.

On the subject of races and classes, the second chapter covers what you need to play Orcs, Goblins, Hobgoblins, Dark Dwarves (the Zvarguth), and Meshkuri.  Given the typical nature of these races in your typical game, these may be atypical of the sort players would find themselves playing.  More often than not, I imagine it's the person who is running the game that tends to veto such an idea.  The Highlands are a bit darker and certainly harsher so these selections may not be so odd given the setting.  Variety is always interesting and most C&C fans will find these a welcome or at least interesting addition to the game.

Chapter 3 is all about new classes though in this section, two of the classes were previously published.  The first of these is the Conjurer which originally appeared in DB6 -Dwellers in the Dark.  Since these modules were being reprinted together in the CK Guide to the Haunted Highlands, it only makes sense to put it here.  The second of these is the Necromancer which appeared in the Black Libram of Natarus.  It's worth noting that the entirety of this accessory (now out of print) can be found in the pages of these two new Haunted Highland books.  Also included is a different and tougher Assassin class, a Witch class, as well as other class variants.

Of interest to many C&C players who have their roots in older editions of D&D will be the rules provided for Dual Class characters.  In principal, the rules supplied are almost adequate though I find myself disagreeing with a couple of points.  Simply put and as I understand it, it's broken.

EDIT - I should point out that this is only my opinion and the following examples I provide are a bit extreme to illustrate a point given my understanding ... By no means does this mean it's unusable and I'm sure it would be fine in regular play.

Take what the author outlines for Base-to-Hit progression for example.  The argument is that you don't 'forget' how to fight and improvement and training in an on-going thing.  Any new BtH bonus acquired in the new class is gained as a result.  At first glance, this might make sense.  However, suppose a high level Fighter (say 10th) decides to become a Bard.  Once his apprenticeship is done with, he can begin advancing in his new class.  Keep in mind that the apprenticeship is half the requirement to reach level two in the new class.  If the average XP needed for the party is about 250,000 to reach level 11, the player who changed class to a Bard who decides to focus on advancing this class only can advance to level 9 as a Bard and effectively be a 19th level character when the rest of the party is 11th.  His BtH would be a 18 compared to the 11 of an 11th level fighter.

The other issue is nothing definite is given on the subject of Hit Dice and hit points except that you advance in the new class normally.  Does this mean that, after rolling 10d10 for hitpoints for those 10 levels of fighter taken, you would then keep on rolling d10 for every level of Bard taken (since you roll up to and including level 10 of any given class)?  Compare 19d10 vs the 11d10 of that simply 11th level fighter who has the same amount of XP.

It's problematic though it could easily be fixed.  Since other class abilities and skills are constrained by the class level itself (and not total level), the same MUST be done with the BtH bonus.  Total HD also need to be limited -- only 10 dice worth can be rolled up for HP and any HP gained after 10 HD is determined by the class the character advanced in.  I suppose that's the easiest way to fix it though Dual Classing in general is far from elegant in a variable XP/Class system.

Sadly, the book's organization becomes a bit muddled after the Dual Classing.  Chapter 4 seemingly continues into magic which, once again, is a repeat of material found in the PHB followed by new spells and a small section on sacrificial magic which were both originally found in the Black Libram.

It really seems like this last magic section should have been it's own chapter but somehow, it got lost in the editing and layout process.  On the subject of editing, along with some of the other things I have seen in this book, it does feel that it was rushed in parts of it.  In the first few pages when I stopped to examine a passage, I found a number of little issues.  I think some of these have to do with the parts of the text that were ported (copied and pasted) into the present book.  In passages that exist in the PHB, I have seen words 'thrust together' because of missing spaces in this book.  On the same page, I've seen another example of sentence starting off with the first word going uncapitalized.  These are very minor things but, it does give me pause to see several example of this on a single page of text that already exists in another book.  For those curious, please take a good look at the numbered page 41 of the book.  It is entirely possible that some of these 'space' issues are due to the program used for the layout of the book, or perhaps it was a slightly older version of the text that was used here.

Overall, I like the book and the companion CK book that comes with it (to be reviewed tomorrow, time permitting) looks to be great.  The book is far from perfect but perhaps it was the fact that a lot of the text in this book was seen before which led to a bit more complacency with regards to the integrity of the book.  Being the responsible sort that I am, I will attempt to point a few of these things out to the powers that be.  It hasn't gone to press yet so maybe a few of these things can be tweaked and the PDF updated.

For those wanting to grab a copy, it is available now (warts and all) at RPGNow over HERE.  It is priced as a MSRP of  $13.99 (cover price for the hardback will be $19.99 when available).