And one of them was my Barrowmaze package!  I was very happy to see this one and opening the box was fun!  Here's a pic of the loot that came in the box -- I pledged at the Barrowmazening level: 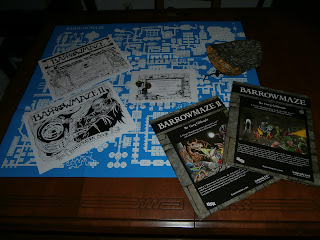 Somehow I forgot how big the map would end up being... It's nice to have a full size map like this and part of me is actually tempted to get a frame for it.  Where I'd hang it up is a whole different problem since I am realizing that my hobby and interests is taking up more and more space.  Too bad moving to a bigger place isn't an option for a couple more years at least.  ;)

The books are decently bound hardcovers and I love the two inscriptions Greg wrote in the books -- one being adapted from one of my favorite movies:

"I say we take off and nuke Barrowmaze from orbit. It's the only way to be sure."


The other inscription is oddly prophetic:

"Barrowmaze Rule #3: On a long enough timeline, the survival rate for everyone drops to zero."

I didn't expect to get a 'Barrowmaze II Publication Certificate' with my shipment but I have to say, it's pretty cool to have -- I'm number 22 of 200 for this first print run.  One thing that I was expecting and was very delighted in seeing was the excellent illustration booklets for both Barrowmaze and Barrowmaze II.  The artwork for these booklets as well as what's included in the books themselves (as I have mentioned before) is an absolute delight!  I'm so glad to have the PDFs of all this material since I intend to keep the printed stuff absolutely pristine! 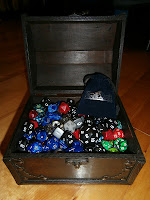 Surprises... I was really surprised at the size of the dice bag.  It isn't small as I originally thought it was.  My initial goal was to keep a set or two in my small chest of dice.  However, it's size dictates that it's to be used differently.  Probably just as well since my chest of dice is getting kind of full and my recent love affair with Game Science dice got me ordering another 4 sets worth...  Maybe it will become my official 'Game Science Dice Bag'.  :)

Speaking of dice... I have three more to add to the chest!  The ones that came with the package are pretty cool actually and I love the colors... One  Red, one Green, and one Blue.  Each die has a different illustration on one of the sides.  One is a skull with helm, one is a skeleton's hand, and one is of a Barrow Wight with the text Barrowmaze written beneath it.  The dice a nice but I do have one issue with them if I wanted to use them in game.  When dice like these are done, there is typically one side which is universally take up by the design replacing the pips or number.  In this case the dice don't use the same side when compared to each other.  The red one (the one with the wight) replaces the 6 and the blue (the hand) does the same.  However, the green dice replaces the 1.  I just find this peculiar and I have no idea if this was done on purpose.  I somehow don't think it is and I think it's just something that happened in the design and manufacturing process.  They'll be a fine addition to the chest!

The other package was not a gaming specific one and, I had ordered it such a long time ago, I wasn't even thinking of it anymore.  It's the Raspberry Pi board/computer: 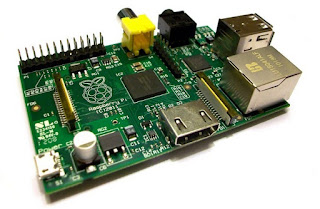 There was a time where I had chosen and was learning to become a programmer due to my love of computers and technology.  I still love computers and technology but quickly realized back in my college days that I really didn't have a strong desire to be a programmer.  Nonetheless, I don't mind toying around with the stuff and the Raspberry Pi sounded like a great way to get more familiarity with Linux.  The fact that it was tucked away in my mailbox (because it's so small) just made it more fun when the discovery of a second package was made!