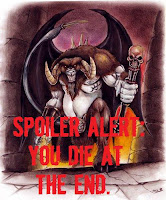 Rappan Athuk is truly a megadungeon on the grandest scale and comprises much material.  Now in it's third published incarnation, those who backed the project through Kickstarter with receive different things all depending on the level they pledged at.

With Rappan Athuk, one will get close to 500 pages of material in the main book if looking at the Sword & Wizardry version and even more due to the nature of the statblocks when turning to the Pathfinder version.  Included was a Bestiary, some Pregens, and various Battlemaps in the Appendix at the end of the book.  For convenience, these items are also included as separate booklets for backers of the project.

Other items which were created for the new version of Rappan Athuk was a GM Screen, a Player's Guide, something called the 'Libram of Fortunate Happenstance', and other additional adventure material -- the Cyclopean Depths.

The Player's Guide will see different use from campaign to campaign but is ultimately useful in getting people 'up-to-speed' with the sort of information the characters will have at their disposal.  It gives a bit of an overview and provides sketches of various places in the area of the dungeon.  It does so by detailing some of the people and places in the closet inhabited settlement to Rappan Athuk and the stories of these residents.

The 'Libram' is actually a set of cards.  There is a set for Pathfinder and a set for Swords & Wizardry and both have cards for Players and GMs alike.  The purpose of these cards is simply to change the possible 'fate' by allowing a re-roll, or automatic successes or failures.  I suppose that with a dungeon such as this, players will need every bit of help they can get.  In all seriousness though, I've played with cards similar to these in other RPGs and they can be a lot of fun so these are a nice 'throw-in' and were on of the many bonuses granted from the Kickstarter.

Of course, those who have not backed the project can of course order a copy of the book itself and, for a limited time, order some of the supplements as well (until supplies run out).  The book itself is truly the only thing you need though if intent on adding this to your collection and have countless adventurers meet their doom by dropping this into your campaign.  It's quite the book detailing over 50 areas to explore!

While I confess that I haven't read this monster from cover to cover, I have selectively checked out different portions of the book and have been delighted by the contents.  As far as the 'look' of the product, it is very reminiscent of many of books produced by Necromancer Games as far as font and organization is concerned.  To make the book easier to use, each level has a sidebar of basic information such as difficulty, entrances and exits, information of wandering monsters, and other special effects to be aware of.  Other areas ... such as the Giant Spider Colony will detail at which rate their numbers will replenish should some be killed off.  This kind of detail is important and, if planning to use Rappan Athuk as a centerpiece to a campaign, will prove to be of invaluable assistance.  The book itself is full of maps across the many pages that make up the book... while huge in itself, no map of any specific area is actually daunting for the GM who really wants to run this as an adventure campaign.

As well organized as this book is, a special note should be made about the artwork used.  I simply love the artwork used.  While the trend continues towards color plates and illustrations, Rappan Athuk reminds us that black and white art with the right shading remains an excellent and very classy way to beautify a book -- especially one of this size.  I do believe that some of the white space left on the last pages of various detailed levels should have been 'filled up' a bit more however this may not be as practical given the two different rule sets that Rappan Athuk is for.  The text flow is surely different (evident by the simple fact that the Pathfinder version is about 170 pages more that the Swords & Wizardry counterpart).

All in all... Rappan Athuk is worth every penny and I look forward to running it.  The MSRP for the book is $99.99 though the PDF version is $40 and a very good price point when comparing this to the physical product.  The PDF version is available immediately and the physical version will be available soon.  Latest news would indicate the books should be shipping to backers any day now (with the delay being on the sets of dice the backers are getting).  You can order direct, HERE.