The demon lords and the insidious messengers (the postal carriers) that serve them have seen fit to grant me a package today!  In this box and covered by (mostly pink) pieces of styrofoam peanuts was my Rappan Athuk material from the Kickstarter earlier this year. 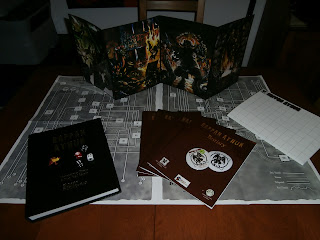 The book, black since I got the Swords & Wizardry version, seems more ominous because of it and looks beautiful.  Sadly, the lower right corner of the cover is a bit damaged -- it looks like the book was dropped or otherwise hit hard but given that the book is meant to be used, I'm not going to fuss much about it.  Give it more charm!  ;)

I love the GM Screen and the panels with art show up really nice.  It's well laminated and is sturdy enough to stand up though I would have wished the cardboard used was a bit more stiff or thicker.  However, with the rumors, area maps, and level connections, it will come in very handy.  I do like landscape screens but between these new screens and the Castle Keeper Screen I used for my C&C games, I've gotten used to these sort of screens.

I'm not sure if I will ever do anything with the actual poster of the cross section though it is neat.  The fold out battle map is a great portable option for a quick erase grid to use for the GM on the go though.  I currently have a plastic artist's 'tube' where I roll up and bring a chessex map so I'm not sure if I'll end up favoring the fold up solution over this one.  The fold up will certainly make things easier to carry.

As for the other booklets, I have one for the Bestiary, the Battlemaps, the Pre-Gens, and the Player's Guide -- nothing fancy here but certainly useful.

As for the rest, an Orcus sticker (I always loved this logo), a button with the same logo with 'Rappan Athuk' and 'I went down the well...' written upon it, and some wicked dice with the same Orcus logo replacing the '1'.  Amongst the debris of the peants was a cute little plastic frog... which will make for a great 'small' giant frog.  ;)

I have all the physical good to launch my Rappan Athuk campaign while also sourcing some great material from the Barrowmaze stuff.  All going well, this will get underway in just a couple weeks from now.