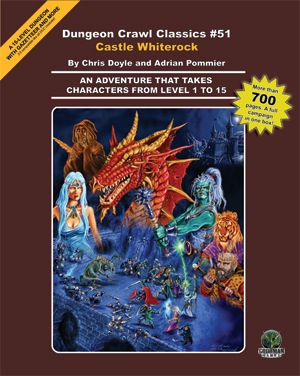 In October's third installment of the Weekend R&R series where I pay attention to the 'megadungeon', I find there is much to love with Goodman Games creation of DCC #51 - Castle Whiterock.  As a box set, it is ridiculously huge.  Take two standard boxed sets of you average gaming product and stack them one on top of the other, and you'll get an idea of how deep the box for this set is.  Anyone who has seen pictures of this boxed set before knows that there is over 700 pages of material.  The reason why we know is simple -- it says so right on the box!  It was also on the pricey side when initially released coming it at $100 but, with the demise of 3rd Edition, it wasn't all that hard to get a deal on the set a few months after its release.  Good for the consumer but, given the release, I think this set got overlooked a bit and dismissed due to some other shoddy 3.x era megadungeon releases (World's Largest Dungeon immediately comes to mind here).

The first thing I noticed when I opened up the box set was how the books are done.  With a name like 'Castle Whiterock', it sounded very reminiscent of a certain legendary dungeon.  It could have just been named Caslte Whiteroc to further home the suggestion that the name is a bit of a nod.  If you feel that this connection is somewhat stretched, the color of the books are a clear nod to the classic BECMI sets. In the box, you have four books detailing the various levels of this dungeon.  The colors are Red, Blue, Cyan-Green, and Black and echo the colors of the Basic, Expert, Companion, and Master sets.  The 15 levels which make up the complex are split up among these four, perfect bound books. Additionally the boxed set contains a Gazetteer on the kingdom, a booklet of maps and a booklet of player handouts.  As such, this is a heavy but sturdy box of gaming goodness.

For anyone familiar with any of the Dungeon Crawl Classic material, the is a whole lot more of the same sort of thing one expects to find in such a product.  It's a quality product with tons of evocative, old school art and clearly laid out.  Admittedly, I have yet to run anything from Castle Whiterock but I have run many a DCC adventure adapted for my C&C games.  I have always found their products to be very well organized, with summaries of encounters and challenges given at the start of the module, scaling advice, and detailed information crucial to running the scenario successfully.  Despite the size, Castle Whiterock is no exception here.  If anything, there is more information give to help a GM run a series of adventures using the material successfully.  There is even a detailed index detailing people, places, and things with respective page references to help find what you are looking for in the set.  Lastly, the black book titled, 'The Fiery Gauntlet' contains a huge array of appendices to supplement this massive campaign.

I think that, what makes this set so great is that it is, much like the rest of the series that came before it, a tribute to old school gaming. You open up any module and you read the text in the introduction which states:

"Remember the good old days, when adventures were underground, NPCs were there to be killed, and the finale of every dungeon was the dragon on the 20th level?"

True to this, the finale amount to pretty much an encounter with a dragon on the final level here as well though it happens to be level 15 in this case.  A good DCC adventure will always have a few twists and more than a few traps, and this set has a bunch of them.  However, there is always some plots and, in some cases, subplots to make the experience more interesting and an attentive gaming group can pull much from Castle Whiterock.  Perhaps what makes this megadungeon manageable is that it is also pretty modular.  By this I mean that you can freely take out or use select levels for your own use if you are just not in the mood for a huge megadungeon type campaign.

Castle Whiterock is a good investment, even if it is expressly designed for the third edition era of D&D.  It is no longer in print but looking at RPG Now, you can get a PDF version for about $60 or, a used copy at Noble Knight Games for $70.  Sadly, the prices are higher now than they were when I picked up a set -- I considered it a steal when I picked it up new for $50 back in 2008.