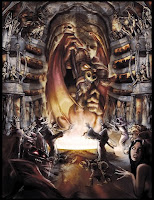 For those who follow my blog and enjoy what started as a weekly tradition, you may have noticed that September has really not seen much in terms of the Weekend R&R posts.  While I don't feel compelled to make any apologies, I want to assure my readers that these are resuming this month and, I've decided to do something a big bigger with them.  Nay... I think 'mega' is a better word here.  October will see reflections and reviews on various 'megadungeons' and this week, I figured I would start with 'Rappan Athuk'.

The first time I heard about the 'Dungeon of Graves' was when I saw was in the form of a beautiful boxed set some years ago at my local game shop while I was residing in Ottawa.  It was awesome... heavy... and pricey!  Needless to say, back then it was put back on the shelf on to be swiped up within a couple of days. If I remember correctly, the store was selling it in the $75 - $85 dollar range but it wasn't just the price which put me off back then.  It was 2006 and this box set, titled Rappan Athuk Reloaded was for the 3.x D&D Ruleset and I was just a few weeks into Castles & Crusades.  At that time, I knew that I could convert and use the material very easily for C&C but the price did make it a bit expensive to contemplate.  When I picked up C&C, I essentially had my fill of the regular d20 products designed for 3rd Edition and, while I would still buy more, I stuck to deals and specials if I did.  There were many deals in the months leading up to and following the release of 4th Edition.  ;)

Since that day, I remained hopeful that I could perhaps pick it up but initially, I had no idea on how limited of a run these actually ended up being.  If I had known -- I might have made an exception and spent some cash.  The fact is that, in all the years I've gamed, I haven't seen nicer quality box sets than those produced by Necromancer Games.  In the years since, I have acquired the Wilderlands and the City of Brass sets they released and consider myself fortunate that I did so at around $35 apiece (MSRP on these was $70 apiece).  I did realize shortly after I first spied upon the box set that Rappan Athuk 'Reloaded' was a remake with added material to a set of three modules for 3rd Edition but I never went out of my way to try and pick these up.  Oddly, these just seemed to pale in comparison with the Reloaded treatment and I didn't want the hassle of tracking them down online for used copies.

So, I put it in the back of my mind and largely forgotten about it.  I figured that, given my present campaigns and preference from my players, the I probably wouldn't use it and left it at that.  In 2007, Necromancer Games released their last product for d20 and this was the City of Brass set.  Fans never forgot the great work that came out of Necromancer Games. 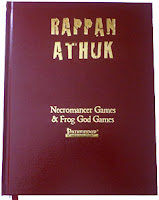 However, Bill Web of Necromancer Games co-founded Frog God Games in 2010 and effectively picked up where they left off.  Frog God Games firs major project was the Slumbering Tsar Saga and as the company picked up steam, it eventually acquired Necromancer Games in 2012.  This past May, Frog God Games decided to re-release Rappan Athuk as a Kickstarter Project and it was officially funded on July 2nd at close to 10x the original project goal.  Rappan Athuk was being released as a Pathfinder version as well as a Swords & Wizardry version.

While I still eagerly await my shipment of physical books from this Kickstarter, I have had the PDFs for near two months now and, it is the campaign I have chosen to run and start later this month.  I have poured through the many files and I have to say I am impressed and excited for what this could bring to my gaming table.

Later this weekend (this is a long weekend in Canada to celebrate our Thanksgiving holiday), I will delve into greater detail about the newest version of Rappan Athuk and what you can possibly expect from it when it hits retail stores (or order it from them) when it becomes available to all and not just the KS backers.