The Problem With Citadel Paints 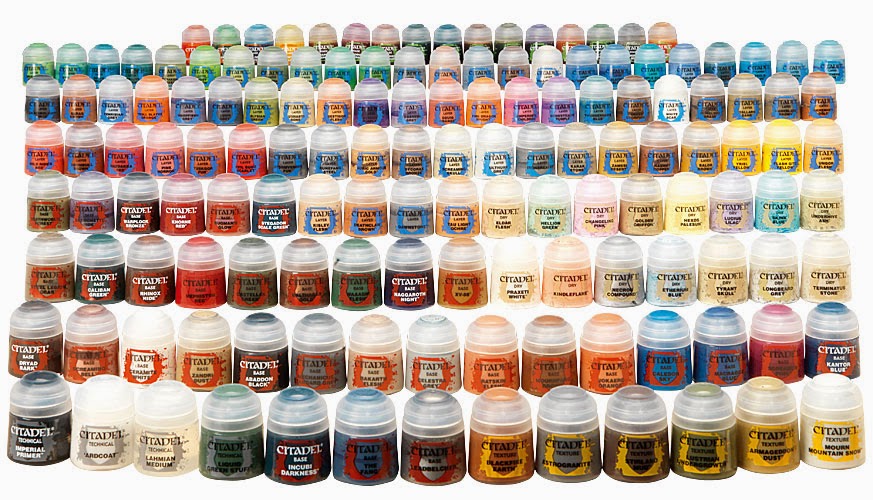 For those who follow my painting exploits, you may have noticed that I have tended to favor the Citadel line of paints.  But why do I do this?  On the surface, it certainly isn't economical.  At $4 a pot at current US prices (bastards charge $5 here in Canada), that 160 range of paints will cost you a fortune -- even if you buy it as a discounted 'ultimate paint set'.

The latest incarnation of the paint line was released in the first part of 2012 from what I understand,  My own introduction to that aspect of the hobby came afterwards, so I actually have had no experience with the older paints.  Reviews were mixed.  Regular uses of the paints seem to come across similar problems time after time even though the paints, on the while, are decent enough.

A couple of good things about them:
And some of the bad:
It's frustrating at times.  The majority of the 'problems' can all be fixed or worked around so it becomes less of an issue to be no more than an annoyance.  Those who buy from the Citadel paint line is likely to encounter less issues if they do so on a 'per-need' basis.  Unfortunately, if you are one of those people who has invested in the majority of the line, you will need to work out the issues as they come up.

I have the majority of the line.  All the bases and layers, Dry Compounds, Shades, and even the Edges and most of the technicals.  Imperial Primer is absolute garbage IMO but I've recently picked up a bunch of the textures for some bases due to pure laziness.  The *ONLY* reason I have these is because of the change in Game Workshop Policies when it came to online retailers in 2013.  I had gotten into the hobby a few months earlier and, when I did, I started with these paints.  They did the job and I liked the selection.  When the policies changes, a couple of online retailers liquidated their stock.  Before this happened, I routinely got 20% off the price of my paints... but with the sale, it was between 50% and 60%.  And this was before the price increase (back then, it was $3.50 US per pot of paint).

So now, when I pull out a pot of paint I haven't used in a while (regardless if it was open or not), I frequently have to shake the shit out it because it's separated and/or had become otherwise 'thicker' and adding some sort of medium to thin it out as necessary.

The pots are terrible if you want to airbrush.  You can try and pour some into a gravity feed or use a dropper to extract paint and drop it in though you will waste paint this way.  The solution is to live with it or go elsewhere for you paints.

And while I can certainly live with it (and have up to know)... I'm increasingly of the opinion that it's time to cut more ties from Games Workshop and have been starting to go elsewhere for my own convenience.

I've been experimenting with Liquitex paints from their Basic line with some success.  Since I have a lot of Citadel stuff remaining, I will still be using it for months to come but the Liquitex paints are going to be used more and more for diverse paint jobs -- especially where airbrushing is concerned.  The fact that the paints come in tubes just makes it that much easier to mix or use with my airbrush... of course, I have some airbrush medium to thin out the paint for the brush and the flow is quite nice.  With the kind of shelf life, 5-7 years, is plenty for me to use and the paints (and quantity in each tube) far surpasses the value in a single Citadel paint pot.  There are 12 ml (0.4 fl oz) in a pot compared to 22 ml in the 48 pack of Liquitex basic paints.  A box of these paints is $60 and the same volume of paints (88 pots for the same volume of paint) would cost $352.  A single 8.4 oz tube (250ml) runs between $10 and $12 so, compared to a pot of Citadel paint, it gets really easy to imagine the savings when you start doing the math.

Of course the problem is the color range... it just isn't as large as what Citadel has done in the newest line of paints but you can argue that it isn't necessary either.  Fewer tubes to play with and forcing you to mix colors isn't the end of the world.  If anything, it will make you a better painter.

It will also get you to use that wet palette you picked up but hardly touch.  Mixing a shade to work on a model over a few days is less frustrating if you can preserve that paint.  By using a wet palette and keeping the point moist, you can use the amount of paint you mixed to finish the job.  I have one that I hardly used up to know simply because of my over reliance to the large line of paints.  Just picking the shade I want instead of mixing it saves time but not cash.

So, lets assume we can cut out the Citadel paints... at least the bases and layers.  That's most of them.  The dry compounds are a neat trick but hardly necessary. However, the washes are very nice and some of the technicals as well.  But it's easy to do away with the rest of them and even the washes have their substitutes.

After the mermaid, I'm planning on painting a few miniatures just with the Liquitex for comparison's sake.
Posted by Moriarty777 at 10:52 PM