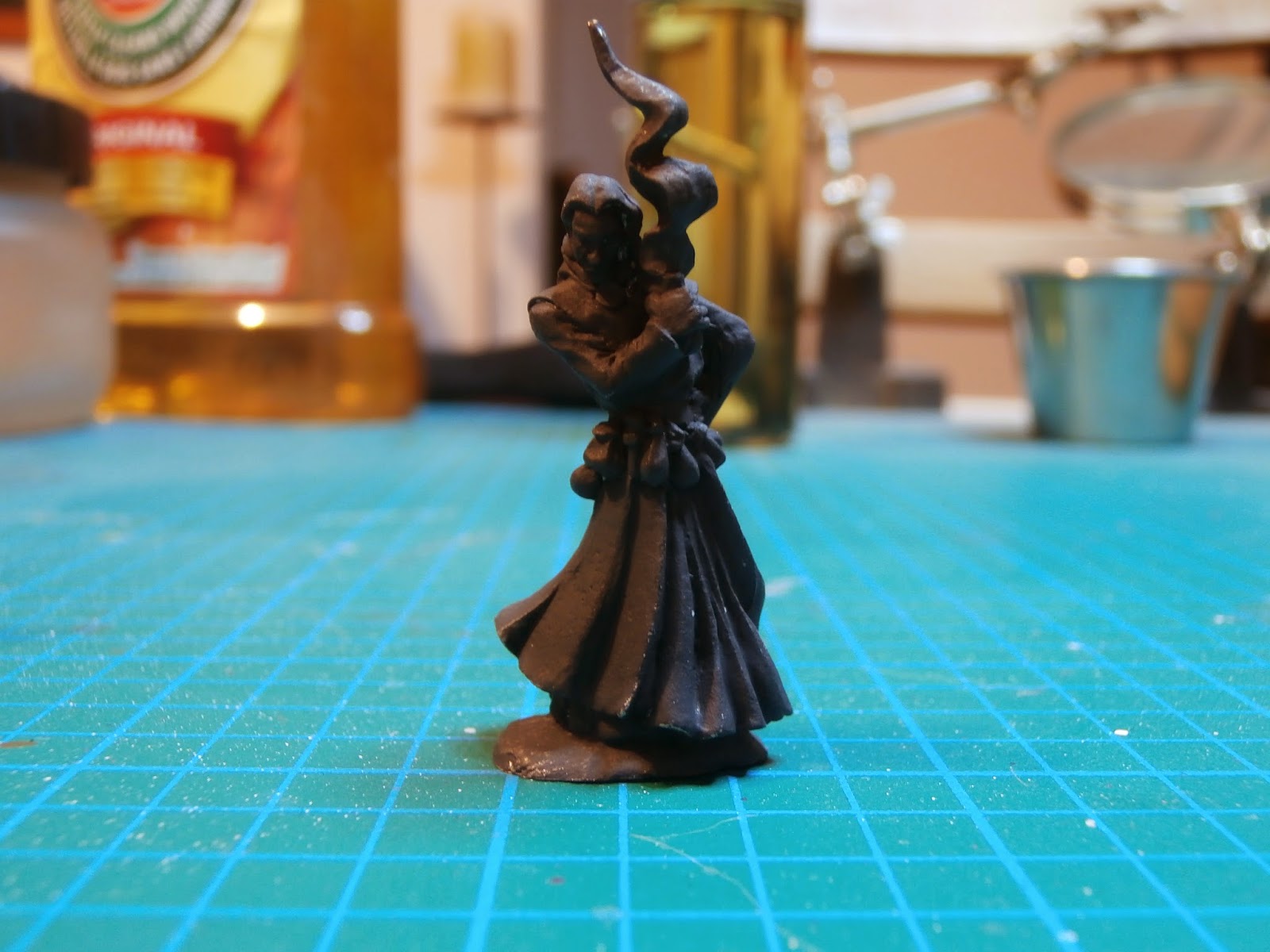 This Wizard miniature was from Reaper Miniatures and was part of the Haunted Highlands Kickstarter from Troll Lord Games with a handful of other miniatures I received with my pledge.  It is certain to see tabletop play at some point.

For the most part, this was a simply miniature to paint but there are a couple of tricky aspects to painting this model which I'll cover in a bit.  First off, the base coats.

After model was prepped (acrylic gesso being my starting point), I decided to keep things relatively simple... clothing predominantly red and white.  Using Citadel paints, I went with a base of 'Khorne Red' for the robes, and 'Ceramite White' for the arms (shirt sleeves).  The fire wielded by the mage was 'Averland Sunset' which I find is a nice shade of yellow to start with.  The best has a black paint applied though most of the best is obscured by other details of the model such as the many pouches.  For those, I opted for a 'Steel Legion Drab' which is a light to mid-range brown.  Skin had an initial coat of 'Rakarth Flesh' and 'Dryad Bark' (a darker and richer brown) was used for the hair. 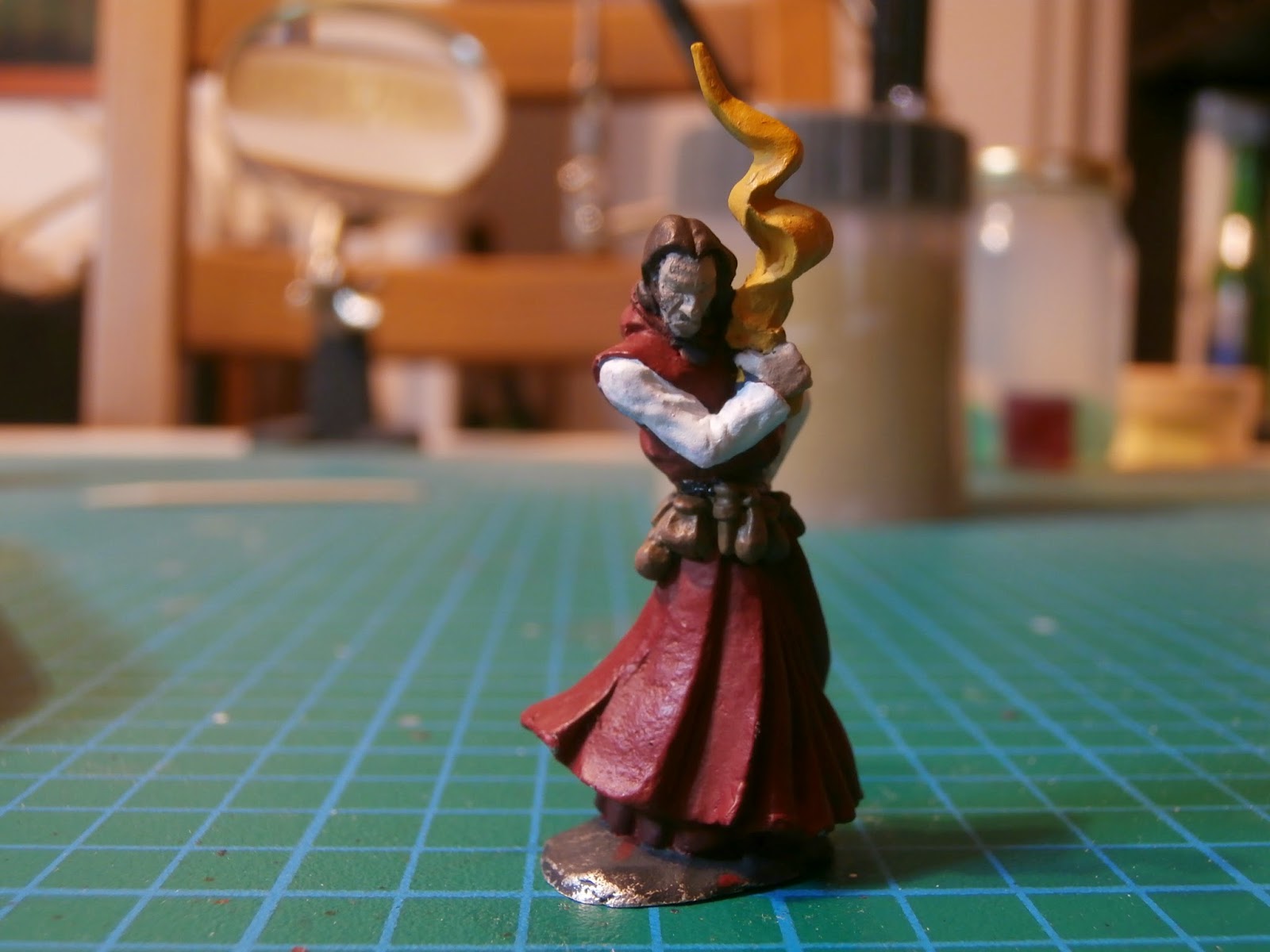 From there, I needed to think about some shading.  Most of the model (save for the skin) got a wash of 'Nuln Oil' shade.  This darkened the model considerably but the layers and drybrushing I applied thereafter would correct and lighten up the areas I wanted to focus on.  The belt and pouches were pretty much perfect with the wash but the red robes needed some attention.  A layer of 'Wazdakka Red' was drybrushed on the robes and, since I didn't want a grey shade of white, I drybrushed some more white on the arms leaving some of the shading intact but restoring (for the most part) the brilliant white that was once there.

The face got more attention with a wash of 'Reikland Fleshshade' along with the hands with some highlighting done with a layer of 'Kislev Flesh'.

The two tricky things about the model is a doing decent looking fire effect and the eyes.  Honestly, the eyes require patience, possibly multiple tries, and probably something more accurate than a brush in most peoples hands.  Oh, and some sort of way to magnify what you are seeing.  On the flip side, aside from maybe needing a few tries to get the eyes right, it is straight forward.  While I have some decent brushes for my detail work, I personally find my brushes a bit big for it.  I use a modified toothpick for this kind of work.  I take a toothpick (one of those bigger round ones), and using my hobby knife, I work the end to a much finer point.  When I have that point, I will dip that in my paint and use that.  Eye is done with some white and the iris done with, well whichever color you prefer.  But on a typical 25mm model, this will be a singly point you apply as opposed to something you brush on.  Black also shows up better so I tend to favor that. 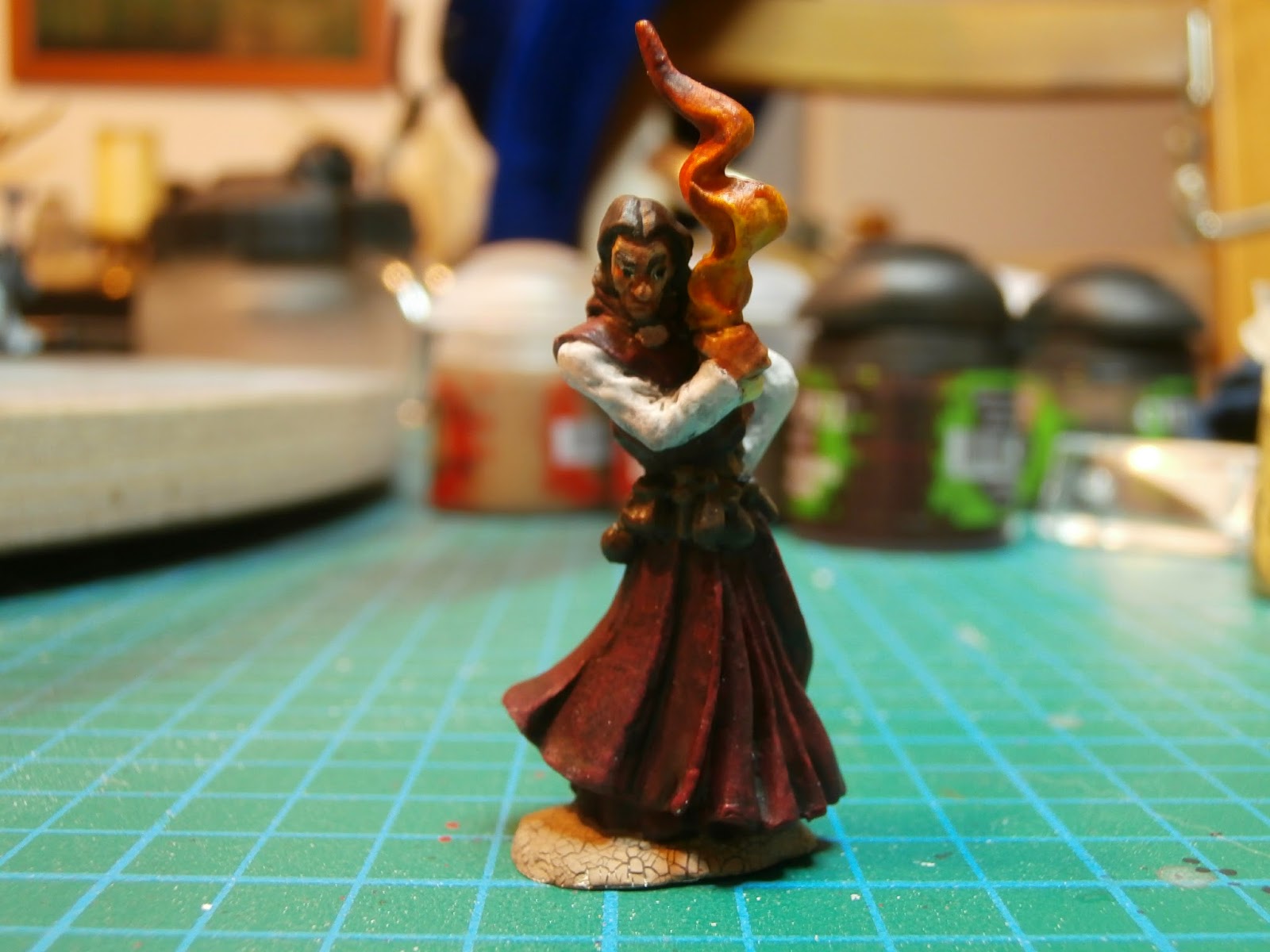 For the flame... Well, it is important to know how fire looks.  Sounds simple but it is a mistake that some people make when painting fire for the first time.  The fire closest to the 'source' is brighter so you can go with a bright white-yellow and as the flames grow from that point, it transitions to an orange and then to a red.  The easiest way I found to do flame is to start off with a nice, rich shade of yellow.  As indicated earlier, I went with ' Averland Sunset' as my base.  I added a bit of 'Flash Gitz Yellow' as a layer but what really distinguished the color scheme was targeted used of both 'Fuegan Orange' and ' Carroburg Crimson' washes.  I applied these holding the model upside down and applied the orange two-thirds away from the tip to the tip... and then 'Carroburg Crimson' about a third of the way from the tip to the tip.  Using a glaze, I applie 'Lamenters Yellow' to the entire flame working the pigmentation and highlighting what needed to be highlighted.

There are certainly different ways to do it, and while the picture doesn't quite do justice to the fire (these pictures are really just snapshots), it does look really nice when you look at the model itself.  It's certainly worth trying at any rate since it's really simple to pull off something good.

With this post, I am a few days behind on the fourth model I selected to paint and, this week and weekend is looking to be a bit busy so I'm not sure when the Mermaid will be up.  But it's coming.