Last Friday, Canada Post delivered my copy of the Game Master's Guide for the Rogue Mage RPG.  By doing so, delivery was completed for one of the oldest Kickstarters I backed which was completed just shy of three years ago on March 5th, 2012. 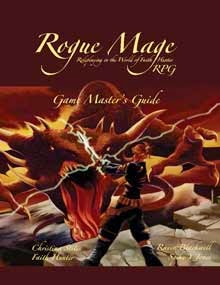 It was an interesting campaign for a few reasons.  It happened before we started seeing some of those 'mega' funding campaigns raising ridiculous amounts of money for one.  And, looking back at all the comments (there are less comments than updates and there weren't many updates the past couple of years), none were nasty like others I have seen that blew a delivery date by a few months.  For some reason, delivery was slated a few months after March but this obviously didn't happen.

To their credit, they did deliver a bunch of rewards instead of holding on to everything until it was all ready to ship out and this probably helped a great deal.  While updates were few, there was still some support and it goes to show that a little goes a long way.  That said, I've seen a lot of other toxicity with out Kickstarters that were still delivering stuff and some of it quite unfairly.

I think it shows how the mentality, perception, and most importantly, expectations have shifted in the past couple of years.  And I'm not thinking of just the backers here... project creators do share in some of the blame when you look at various projects.

However I am happy to check another off my list.  Sadly, I'm not sure if I'm even interested in the game anymore... it's still fascinating to look through and the concept (and novels) are pretty fun.  I am still happy to have supported it though, I have to say that the binding of this book is sub-par.  The book looks like it's ready to come apart but maybe I was just unlucky with this one.  While I'm a bit disappointed with that, the the content itself is solid.  I'll still hold on to the pair of rulebooks and novels I got from the Kickstarter... the books were signed by Christina and the author of the series, Faith Hunter.

Who knows, it might make for a solid one-shot, though, if I did that, I'd adapt the system a bit to streamline it and turn it a bit more rules light for the game.