I've written on my love of the X-Wing Miniatures game in the past and, while I don't get to play as often as I would like, I do get a game in and it is currently my 'go-to' miniatures game.  It's a simple game to pick up and play but has enough strategic elements during play as well as point build considerations to make it a very popular game.  Add to it the beauty of the pre-painted miniatures itself, and the fact that you can get an interesting taste for the game just with the starter box, and it's a great game for experienced gamers and newbies alike.  You can read my review of it HERE, if so inclined.

That said, having a few games under my belt, I've decided to write about the builds I'm doing how how they fair in the matches I play.  I figured it might be an interesting read others who follow the blog and play the game.  Constructive comments on the build or suggested variants are, of course, welcome.

With the most recent match, my friend and I agreed to a 125 point build.  My friend is my usual opponent for these games and his focus is Imperial.  I can play either side but, will play Rebel for these encounters.  At a point count above 100, some experienced players will argue that Imperials always have an edge due to numbers.  It comes down to one side always having more guns at a gun fight.  That basic logic is sound but I disagree with it.  It's no surprise that Rebel ships tend to be on the expensive send compared to Imperial ones but, they are generally balanced.  This is the reason why there is one X-Wing and two Tie Fighters in the starter.  An X-Wing vs two Tie Fighters is a fair fight and all that remains is strategy on the tabletop and the luck of the dice.  However, the lowly Tie Fighter is extremely effective when traveling in hunting packs.  In a larger point game, a squadron of four Tie Fighters flying and fighting in formation can tear an opponent to shreds.  The more points the Imperials have for their build, the greater likelihood that sheer numbers could overwhelm an opponent with fewer ships -- even they have the same amount of points to play with.

I've also seen people crap on some of the vessels like the A-Wing and the newer release of the Z-95.  People were enthusiastic about the initial release of the Z-95's with the possibility of Rebel swarms.  However, the Z-95 just doesn't have the same sort of maneuverability of a Tie Fighter.  I have also not seen a lot of love for the Hwk-290.  So, it is with that in mind that I decided to build my 'Misfit Squadron'.

The true stars of the build were the A-Wings of course, with the two Prototype Pilots piloting A-Wings with a Stealth Device, their agility was effectively raised to 4 (at least until they lose it) and Gemmer in the other A-Wing has a 4 agility when any enemy ship is within range of 1 of him.  A-Wings can get into an engagement as fast as they can withdraw from it as the situation warrants.  The additional Outmaneuver card on Gemmer also makes him more dangerous should he end up on an opponents tail.  However the Refit lowing the total cost of the build by 6 points effectively pays for the two Stealth Devices which is an amazing card in the game.

The two Z-95s were inexpensive ships meant to stay close to the Hwk-290 which was the least fast and maneuverable ship in the build.  However armed with an Ion Cannon Turret, the ability of Jan to give an attacking ship (within the range of 3) an additional attack die, and possibly giving other ships an action (via Squad Leader), the Hwk-290 makes for a great support ship and the Z-95 work well with it.  Add those nifty Proton Rockets to the Z-95's and they can hold a nifty and nasty little surprise should anything decide to prey on the hawk.

As it turned out, I had matched the Imperial build ship for ship which was one of my hopes -- both sides had six vessels.  The Imperials consisted of two Interceptors, Vader in his Tie Advanced, and three Tie Fighters.  I was surprised to see the build mind you as my opponent opted for name pilots vs regular and inexpensive ones -- the build could have easily squeezed a another Tie Fighter in there with different pilot and ship choices.  I honestly figured I'd be seeing a Tie Phantom in the mix and was partially relieved to not see it.

Board layout was simple, I had two groups... the A-Wings and the Z-95s & Hwk-290.  Imperials split up the forces into three Tie Fighters and Vader & Tie Interceptors.  The first round was simple enough... no shots exchanged but the A-Wings went to their maximum range (5 Straight) towards the Tie Fighters.  The hawk and convoy moved slowly across the board in a different direction.  The Tie Fighters moved towards the A-Wings where as Vader and his wingmen were making for the hawk.

Second round saw a lot of action.  The first kill went to the Imperials when one of the two Z-95s was taken down in one shot by an Interceptor.  However, the second kill went, surprisingly to the other Z-95 who killed the other Tie Interceptor in one shot.  That Interceptor had the privilege of getting ionized by the Hwk-290 before it got killed.  The kill shot was performed by the surviving Z-95 who had locked on to his target, fired his Rocket with a total of 5 attack dice (2 Attack dice + 2 from his Agility and +1 from Jan).  The dice were hot for me... but not for my opponent in that exchange.  The A-Wings on the other hand were started harassing the Ties at great efficiency and the Ties were unable to score a single hit.  The Ties were unable to score a hit on the A-Wings at all during the match.  In that same second round, the A-Wings took out one of the Tie Fighters.

The third round saw one of the Tie Fighters receive heavy damage and Vader managed to take a good shot at the hawk.  Chewie was sacrificed to avoid a hull point of damage and to bring up the shields once more.  However, by the 6th rounds, due to a gross maneuvering miscalculation, the two Tie Fighters had wound up off board -- removing them from the match.  While I'm not a stickler for those kind of rules (a game between friends), my opponent realized how badly things the tables had turned against him, and conceded defeat.  It was very apparent that the damaged Tie would not survive another round of fire and the both the HWK-290 and surviving Z-95 were holding themselves very well against Vader and the Tie Interceptor.  To add insult to injury, Vader was also ionized the previous round very close to the edge of the board and risked going off board as well.

It was a Rebel Victory!  Losses were a single Z-95 and the Hwk-290 received very little (no) damage from the incursion. 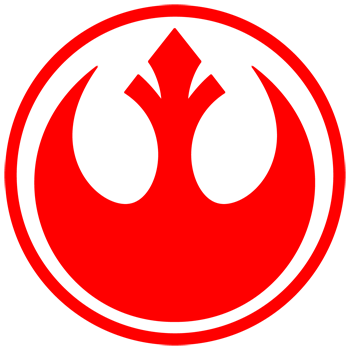 At 125 points, Misfit Squadron performed admirably and while my opponents strategy was flawed, I think that had Vader and Interceptors had gone against the A-Wings instead, it might have gone a bit differently.  I'm certain the Hwk-290 and Z95s wouldn't have had difficulties with the Ties though.  Misfit Squadron will be called to duty again in the weeks to come against a different 125 point Imperial build and we'll see if they will fair just as well then.