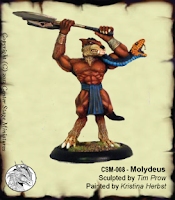 As I sat down to begin writing this weekend's edition of the R&R (focusing on another 'mega-dungeon' for the month of October), I decided to check on the progress of the latest Kickstarter I cave on.  As some of my readers know, I recently took part of that mega Reaper Bones Kickstarter project and spend a bunch of money on an aspect of the hobby that I had previously not really delved in.  The KS that Reaper has done was simply fantastic and everything seems very well in hand.  Always nice to see -- especially if you pledged much in terms of hard earned cash.

It was a fellow gamer that suggested I check out another Kickstarter effort for some miniatures which was a line that focused on demons and devils.  It certainly caught my attention and I did do a bit of research but, truth to tell, I initially resisted it.  I mean, I'm already getting over 500 miniatures in less than six months from now which will require many other months of painting and necessary supplies.

Storage for these is a whole other issue I haven't a clue how to best resolve either.

That said, I really liked the subject matter so I kept tabs on it during their run.  We are approaching the 24 hour mark and, while it's easily met the initial goal, is still about 10k from its final set of bonus goals.  Of course, the amount raised is a fraction of what Reaper has managed to pull in and there are probably a few reasons for that.

The truth of the matter is that pictures and sketches are important as well as a concrete idea of what to expect when we finally get these.  While there is a neat little video to check out and there are some great examples of what to expect, I think the most interesting of the pictures and one of the things which sold me was this pic showing scale of a 28 mm dwarf next to one of these demon lords. 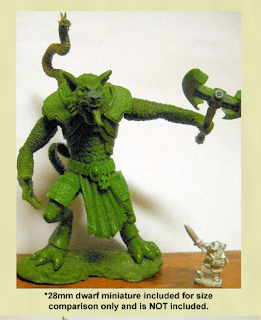 That's one big miniature and by the sound of things... there will be more big ones in this bunch fully making this KS of interest to at least check out and consider.  Of course, I think the great thing about this particular KS project is a bunch of mini's can be added even if pledging at the most basic level.  Even the $5 pledge gets you a couple of adventurers.  On the other hand, maybe you just want a really big mini... though at this point, maybe model might be a better word since there is nothing 'mini' about this.  A 5 headed dragon 'king' of evil dragons (let that one sink in for a bit) which can be gotten for $75.

After the KS, there will be a pre-order price from the Center Stage Miniatures page which will be $129.95 and from there, the MSRP will go up to $189.95 once the pre-order closes.  Even then, it will be cast to order once KS and pre-orders numbers have been met.

Bottom line: $75 is a hell of a bargain compared to the eventual, final price.  You don't mess with the 'king'.

If you want to check them out, you can go to their KS page over HERE.