My first taste of Chaosium's 'Call of Cthulhu' game came about in 1992.  At the time, I was just a military brat living in Germany and a week long trip in High School had me and my classmates visiting the city of Berlin.  It was just a couple of years after the reunification of Germany which followed the fall of the Berlin Wall and there were still very noticeable differences with in the Eastern and Western parts of the city.  When traveling throughout Europe, my friends and I were always on the lookout for Comic Book and Gaming stores and Berlin was no exception.

Up to then, I hadn't really been aware of the Call of Cthulhu RPG -- I was still happily picking up whatever TSR was shoveling out at that point.  I was only vaguely aware of who H.P. Lovecraft was at that point only really only started reading him about a year later.  I was, nonetheless very curious about the game, when my friend picked up the 5th Edition copy of the rulebook in a hobby shop we were visiting while in Berlin.  It has such an evocative cover and, is still one of my favorites.  Along with this purchase though was Chaosium's original 'Horror on the Orient Express' adventure campaign. 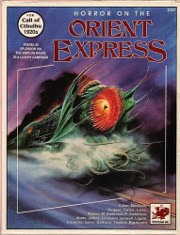 My introduction to Call of Cthulhu was a brief one... it was a starter adventure which my friend ran close to Halloween.  I loved it... but it wasn't for everyone.  Shortly thereafter, I made a couple of investigators for the 'mega-adventure' and began playing.  In hindsight, I have no idea how close or far was strayed from the plot but I suspect it was pretty far.  I technically was running 'solo' through it -- the secondary character was in case something happened to the first (meaning insanity or worse).  I clearly remember that character and I remember quite a few situations when I was playing where I was VERY lucky when it came to some of the die rolls.  He was a 'shutter-bug' and I modeled him after Joe Pesci after seeing the movie, 'The Public Eye'.

Sadly, we didn't play many sessions of the game.  My friend who was running it moved and my own time in Germany was also coming to an end.  My father had received his new orders and the military base itself was being shut down in '93.  Call of Cthulhu and Horror on the Orient Express certainly made their impressions upon me though and within the year, I picked up my own copy of the rulebook.  Horror on the Orient Express remained elusive though and, having never picked up my own copy, over the years I still occasionally found the printed passport and character sheet from that campaign.

Just over a couple of years ago though, Chaosium decided to Kickstart a 're-imaging of the iconic' campaign.  Launching in mid-August of 2012, it quickly funded and beat a bunch of stretch goals by the completion of the Kickstarter at the end of September.  They were asking $20,000 and got over $200,000.  Did they deliver this on time?  Of course not.  Very early on, they were hopeful for a August 2013 release... and then August 2014 rolled around.  At least I was able to touchthe sealed box they were showcasing at Gen Con that year.  Finally, towards the end of 2014 -- packages began to roll out and I got mine on January 5th.  The package made good time as far as shipping was concerned.  Looking at the customs declaration form, it would have been mailed out on December 31st.  It was a heavy box and unpacking it was awesome. 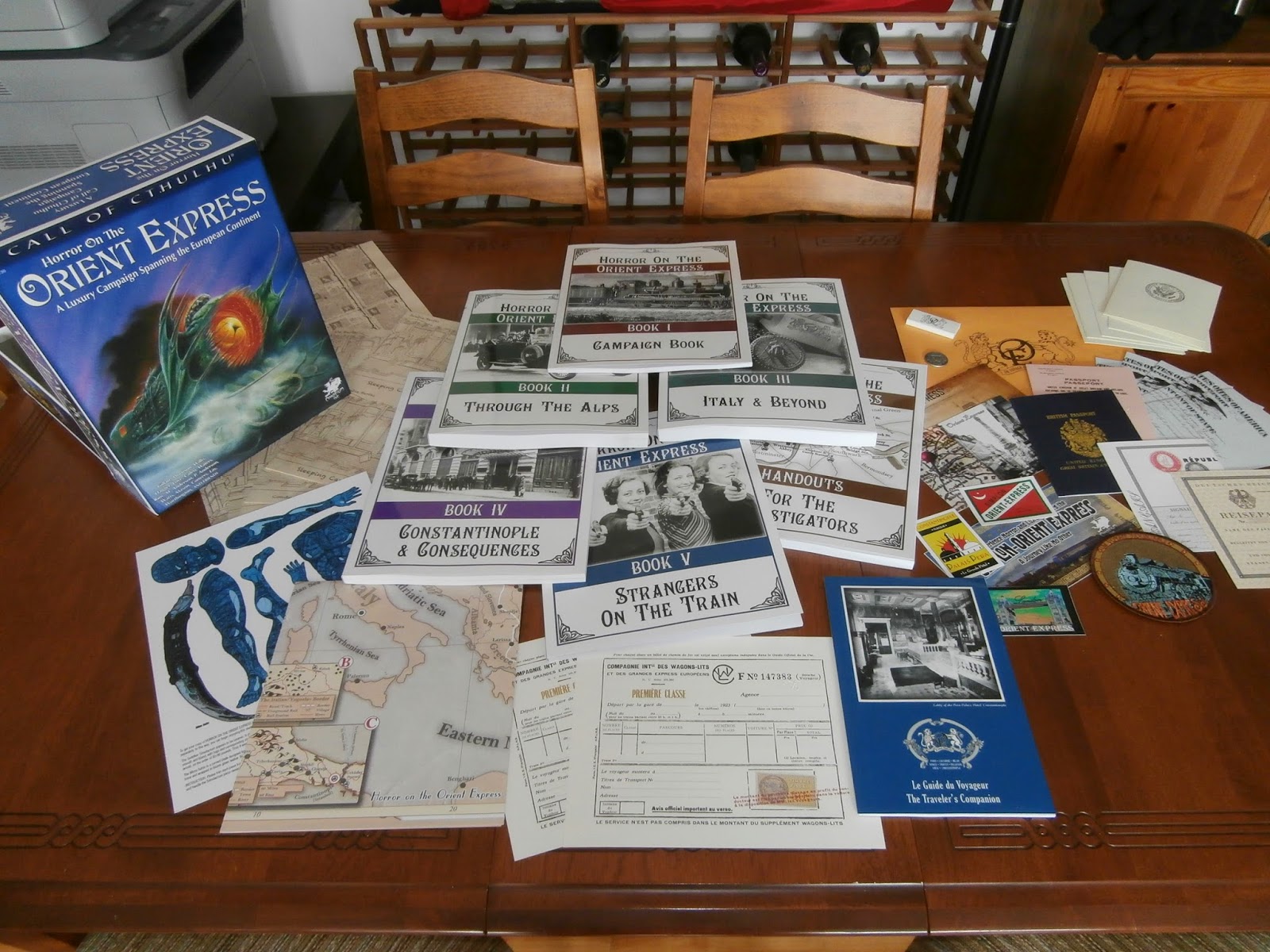 Despite the fact that I saw the box at Gen Con in the past year, I somehow forgot how massive this thing was.  The original, from what I remember was the size of a small box set at best.  This new, and appropriately termed luxury campaign, is a beast in terms of size and weight ... the box is crammed with material and, backers of course got a little (or a lot depending on their pledge level) more.  I kept things very simple and backed at one of the lower levels as money was tight at the time (though, when isn't it).  I opted for the Campaign Deluxe level and, somewhere along the way, I added a bit more to get the Keeper Screens and the miniatures.  The Campaign Deluxe came with the boxed set, tote-bag, T-Shirt, and dice and, thanks to extra stretch goals, I ended up with a couple extra goodies like another T-Shirt.   The basic pledge level for the boxed set was at $60, and for $10 more your got T-Shirt, Dice, and a Tote-Bag.  At $70, this was incredible value and the miniatures add-on was $25 where as the Screens was another $11.  I was asked to add $10 for shipping bringing my total to $116. 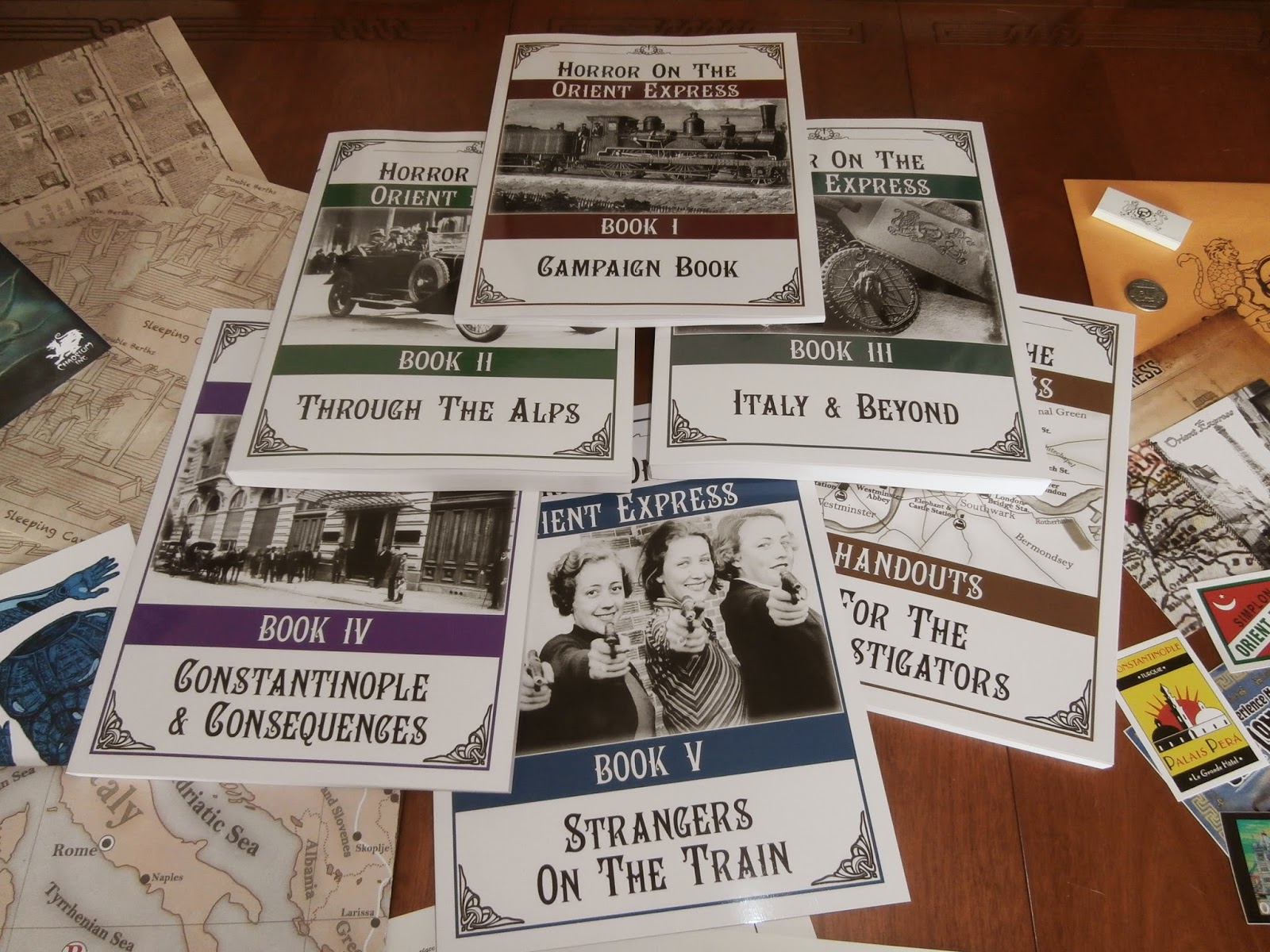 What is the retail price on this sucker since it can now be bought on Chaosium's online store?  It retails for $119.95.  In other words, with the add-ons and all the swag that accompanied the box set, I really came out ahead -- especially if you consider that the majority of the shipping was waived for Canada (it's was already factored in for US residents).  Shipping would have been a fortune in comparison and, seeing that they still need to send out the miniatures, dice, screens, and a higher quality component for the box set, the costs to Chaosium isn't over.  Despite the successful Kickstarter, I suspect they are taking quite a hit when shipping to destinations outside the US.  However, as long as their costs to produce the set were low enough, I expect they will be just fine and the end results of this project are astounding. 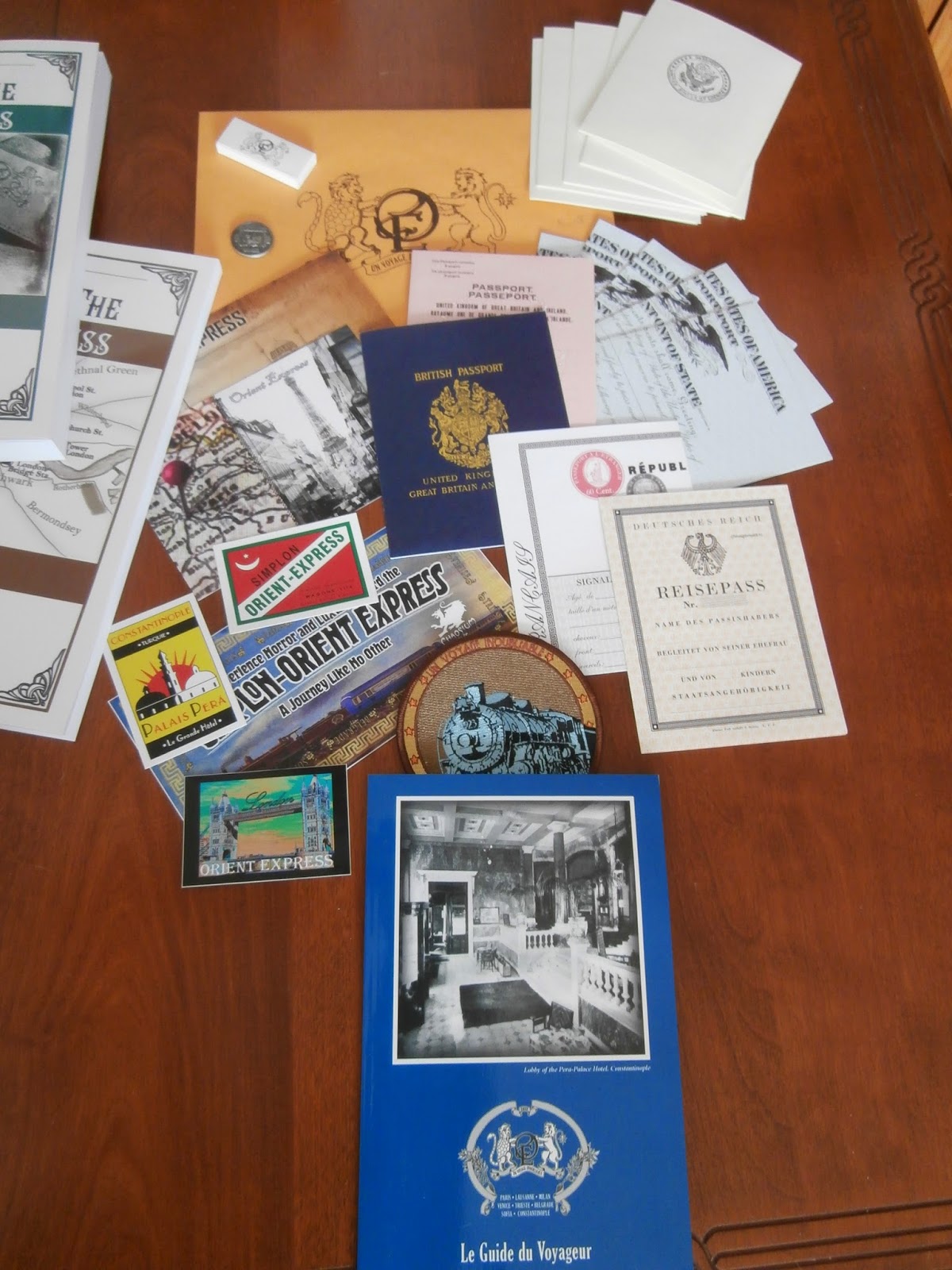 The contents of this leviathan-esque boxed set includes five books plus the book of handouts and an additional "Traveler's Companion', a map showcasing the route across Europe, postcards, luggage stickers, a 'matchbox', passports, train plans / maps for miniatures, and die-cut fragments of the simulacrum and ceremonial knife.  Excluding the companion and handbook books, were still looking at 800 pages of campaign material though some of it is optional and separate from the main story-arc.

Book 1 provides a great overview of the origins and history of the Orient Express and serves as a great overview for the entire campaign.  Information of staffing, train components and car arrangement, and prices as well as an assortment of 1920's information is presented in a clear, concise, and very readable manner.  By illustration and photos, the book is handsomely presented.  Given how large and complex this campaign could be, there are several pages devoted to running the campaign breaking down cores scenarios and optional scenarios along with locations and timeline.  The main story does take place in 1923 but some scenarios will take you as far back as the year 320 (albeit an optional one).  A full history of the Sedefkar Simulacrum is provided along with the scrolls with advise on how to run the campaign.  At 74 pages, this makes it the smallest book (not counting the Traveller's Companion) but perhaps one of the most indispensable.

Books 2 - 4 represents the adventure campaign itself.  Given the size and complexity, it is already broken up into 19 different scenarios -- 15 of which are part of the 1923 campaign and 11 of these are part of the 'core' adventure.  How long each scenario will take to play will depend on the scenario and players but all have sufficient information and handouts  to make the journey through this campaign fun and intriguing.  All books have an array of photos, illustrations, and maps and carry through the look introduced in the first book throughout the rest of the set.  Because it is broken up, it really serves to make the campaign more digestible to read through and prepare for the game master.  It really makes this campaign 'less daunting' to run as well.

Book 5 is a great addition and is a book of NPCs.  There are forty in all and they represent persons the characters may bump into and converse with while traveling on the Orient Express.  Five of these are staff characters on the train.  They all have just enough background and information to provide a 'feel' for the character and, more importantly, they could end up being a player character in a pinch.  Death and insanity is not uncommon in a Call of Cthulhu game.

Finally, there isn't much to say about Book 6 of the boxed set.  It's collects all the maps and handouts shown in the previous books together in one place.  The pages are perforated for easy detachment which will make photocopying them that much easier.  Unless you were seriously thinking of detaching them and using them which, I suppose is an option.  They do sell copies of Book 6 separately as well.  Fortunately, I have a PDF version along with my physical box set so I can print up the hand outs I need without having to touch the book.

Is $120 too much to ask for?  That's a fair question... I was lucky to get in on the Kickstarter so I got a great price for it.  You do get a lot in the set and there is tremendous value with it like some of the 'props' which always help to add flair to a game.  Given the page count, the asking price certainly isn't unreasonable.  If you consider some of the mega-dungeons and campaigns that have come out recently, it is evident that most are charging a higher price point than many would be comfortable with.  Rappan Athuk from Frog God Games sells for $100 as does the Tome of Horrors Complete.  Each of those book are under 700 pages (Rappan Athuk is about 500 pages).  You've got over 800 pages plus the handouts and maps in this set so I think the price is just about right.  If it is too much, then the $60 for the PDF is certainly more 'reasonable'.  With a printer and running this campaign off a laptop or tablet, it would be very manageable to do and certainly worth the consideration.  Both are available to order from the Chaosium site.

It's a great set and I do love it and I want to run the campaign so much more. The year looks to be a busy year for me with my own wedding coming up, my ramped up miniature painting schedule, the gaming I am fortunate enough to currently do, and Gen Con.  However, I think that 2015 will finally be the year I also start a Call of Cthulhu campaign and I think that I will do so with this magnificent boxed set.