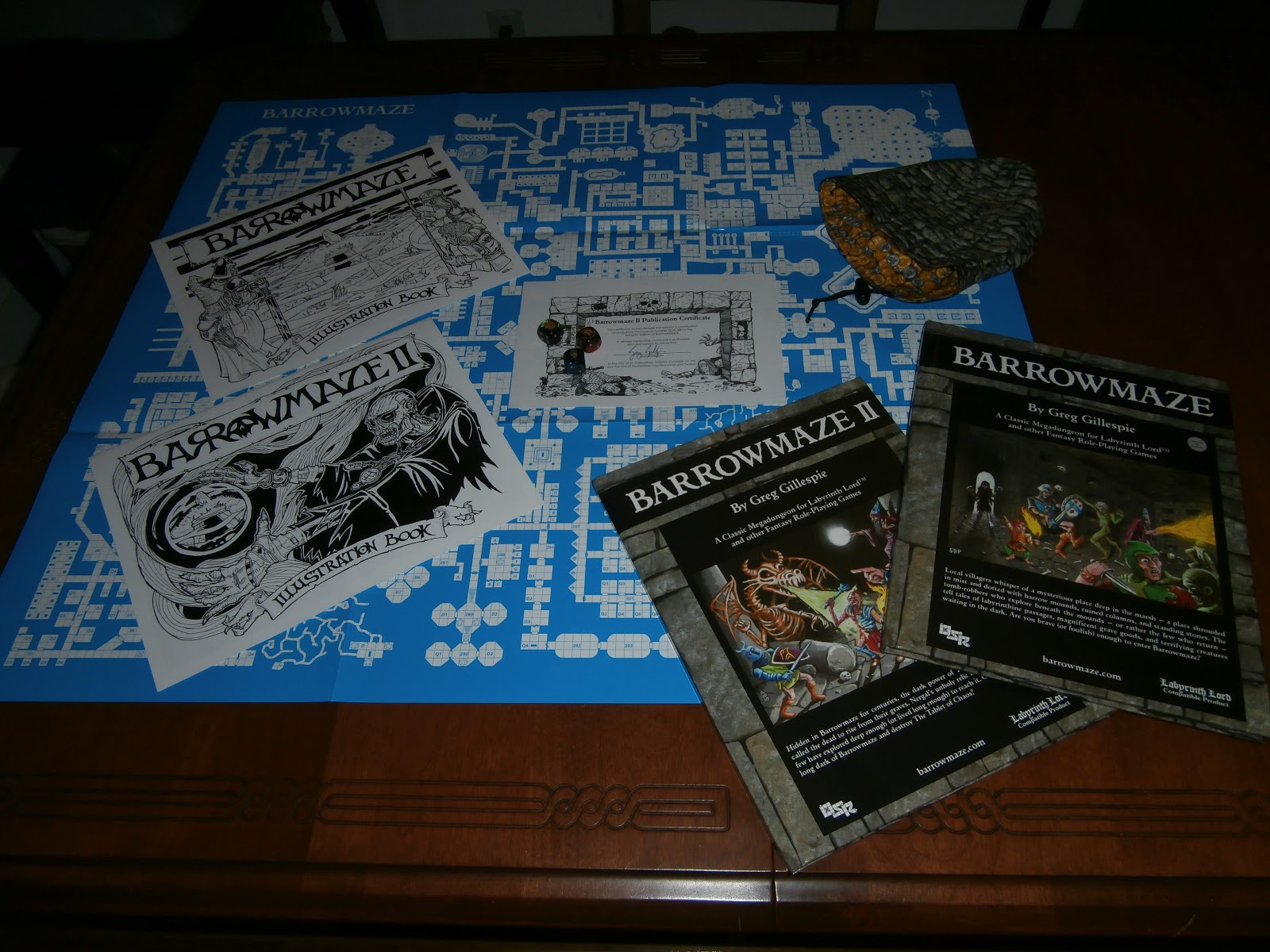 Adventure gaming modules are a staple in the pen and paper RPG hobby.  The classics published in the early days of TSR continue to be sought after and the second-hand market continues to sell these gems at questionable prices.  Some of these classic adventure scenarios have been published a number of times and have been converted or re-purposed over the years.  Wizards of the Coast went as far as offering premium reprints of some of this material a couple years back by collecting the S-Series and the A-Series of modules into a couple of very nice look hardbacks to complement the other premium reprints they had been doing.

I find gaming modules to be an interesting thing.  When I first started in the hobby, I ran a few of them but then starting doing my own stuff.  I then began working on my own setting and my own adventures and campaigns for my group and I to play in.  But that was ages ago back when I was still in High School and had a lot of free time and gaming happened a couple days a week.  Many years later when I'm in my thirties, work and responsibilities catch up with me and I find myself with very little free time.  When I started with Castles & Crusades, a rules light that made running games a bit easier, going back to the route of using adventure modules just made sense.

It's rare that I run an adventure 'as-is' but it does happen once in a while.  When I began working to produce some adventure modules for Castles & Crusades and then some conversions for Swords & Wizardry, a bunch of different questions came into play for me and I've been thinking how to tackle these issues in a serious manner for the past couple of years.

What kind of modules should be produced?  What are people going to do with these modules?  Should things be kept as practical, convenient, and inexpensive, as possible or should one consider the collector and enthusiast?

The simplest answer to all of this is not easy at all because it comes down to who you ask.

TSR's modules during the first couple of decades were nice and functional.  The earliest were not necessarily long and complex but as time went on, there was a sense of 'value' to them.  Card-stock covers which were detached from the interior, saddle-stitched (er... stapled) booklet with map inserts, and the like.  Even the few classic trade dresses employed are constantly being imitated by the OSR community.  But then you also had the 'other' publishers back then.  For those who picked up an old Judges Guild module, who can question about the inexpensive and, frankly, cheap paper/print they published with.  In my mind, this style of print was always more of a 'disposable' kind.  Our hobby seems to draw collectors so we are fortunate in a couple of ways when you consider JG products -- we hold on to stuff and try to preserve it and someone had the intelligence to try and get this preserved in an electronic format.  Other efforts, such as some of the Role Aids material put out by Mayfair Games was also similar to the TSR stylings of the day though the production quality was slightly below that of TSR's own products.  And, you had all the 'homebrew' and 'independent' (and certainly unauthorized) efforts.


In a past-d20 era with an SRD and OGL given the accessibility of POD and small publishers, there arose many an effort to put out material and, once again, you have a very clear aesthetic divide.  On the one hand of the spectrum, you have some of the more recent publications for Lamentations of the Flame Princess.  While I cared little for the initial look of the earliest products, it was very much a tribute the early xerox and staple jobs that we so popular before the internet and accessibility of Desktop Publishing.  I wrote about the one of the first products I got, being the Random Esoteric Creature Generator over a couple of years ago HERE.  Now, with his recent releases, I really believe that the hardcover books being produced are the gold standard that the OSR and other small publishers should strive to in order to produce PREMIUM adventure scenarios and books.  The first couple that caught my eye and I picked up were the LotFP edition of 'Carcosa' and the 'Ilse of the Unknown'.  Those were nice books but still nothing compared in terms of the quality and presentation of the Rules & Magic hardcover book which came out afterwards.

On the other side of the spectrum, you have the handcrafted charm of things such as the OSR fanzine, 'The Manor' by Tim Shorts and company.  Despite some of the flak that Brave Halfling Publishing has been under the past couple of years, those who get their hands on the stuff often comment on the high quality and 'vintage' feel of them.  Collectors love some of this stuff and, even go out of their way to get their hands on it. Of course, premium quality or even some 'small batch' press stuff will fetch a higher price and arguably it should in some cases.  I often am taken aback when I look some of the high prices being asked for when I look at some of this stuff but, once again, it appeals to the collector.  I know some modules sell for very cheap in comparison despite being quality.  Once again, what do you do once you use it for your regular group?  Sure, it is entirely possible to run it again for others but will you?  Will you turn back to it for inspiration or will it lie safely tucked away in a bookshelf?

I ask these questions because, I found my use for modules have changed in the past couple of years.  I used to collect them but have increasingly cleared my collection of many items including a lot of modules.  When I run something, I use the PDF -- print what I need and that way I can write up as much notes as I want on my printed copies or simply use the on a tablet in conjunction with a pad of paper and pencil.  I continue to collect these electronic copies of adventure modules and generally don't bother buying physical modules from TLG anymore for C&C.  But that's just me.  Others simply prefer reading or owning a physical copy -- and I get that.  But for those, I almost think I'd rather a premium option or perhaps even a collected one (the Haunted Highlands is an example).

Given the nature of an adventure module... the shorter it is and more singular in its purpose or use, the more disposable it should be.  There is nothing wrong with an inexpensive production quality and Judge's Guild is a great example to follow.  Obviously, an electronic copy is something different but a great compromise (or should be) to release an inexpensive product while still releasing a limited or premium physical product.

But despite all this, it still comes down to the GM running the adventure.  What he needs vs what he prefers since, at the very end, THEY are the customer.