Partway 2014, my sister-in-law commented on some of the new Brushes I had talked about and mentioned it would be nice if I could maybe starting paint some miniatures for my niece who was born in late 2013.  She sold the idea as a having a piece done a year and once a year there after would be a nice thing to have while growing (while remaining out of reach).  It wasn't a bad idea and the more I thought about it, the more I liked it. 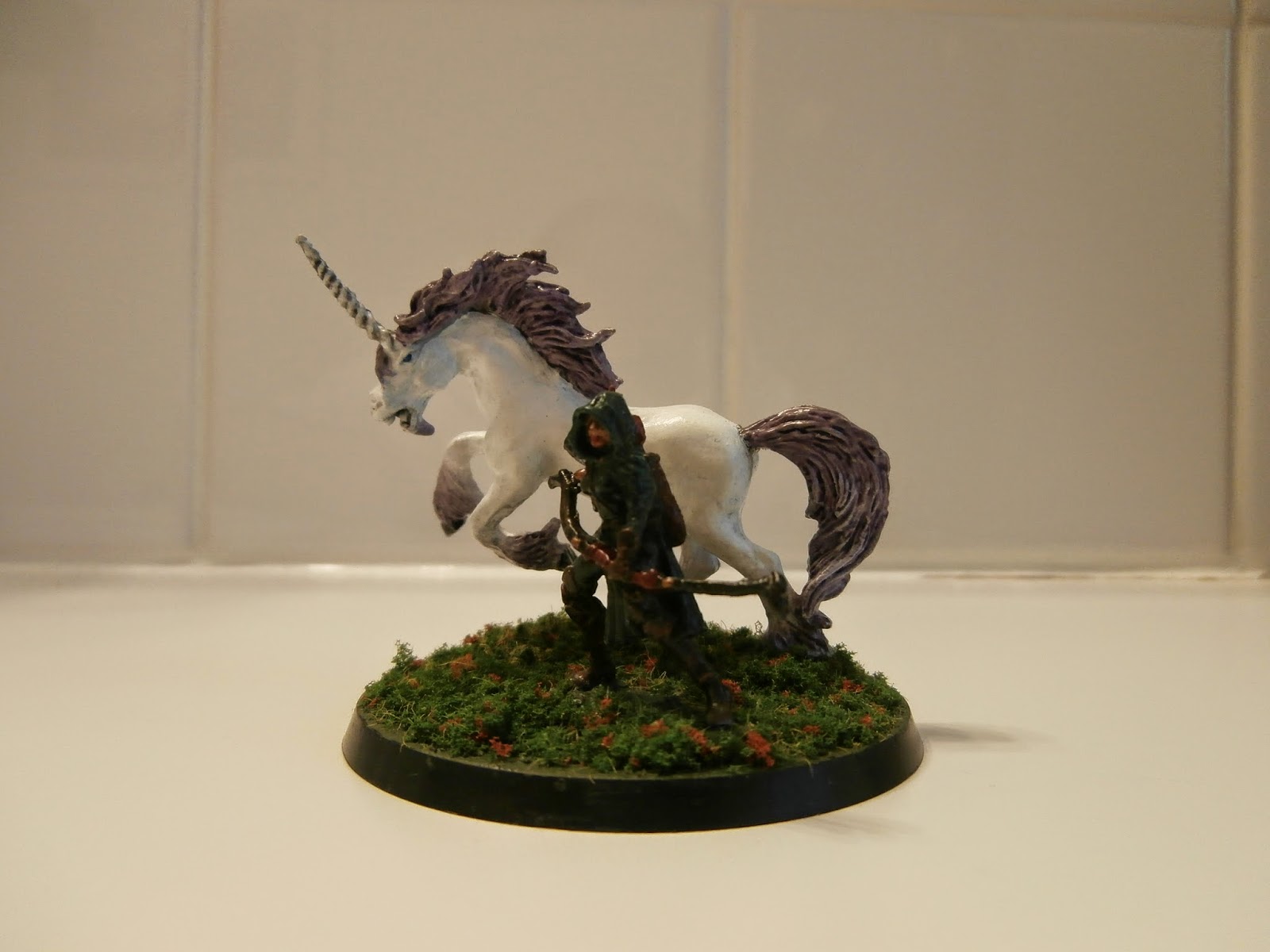 In a few years, it might also be a very good way to see my skills have advanced given increased experience.

So, here is the first one for Christmas 2014 and how I went about doing it (as in the past, I tend to use Citadel paints):

I originally wanted to do another 'Pathfinder Dragon' from Reaper's Bones line but, alas, it read as out of stock.  I decided to do a Unicorn accompanied with a Ranger and I figured it wouldn't be too complex and give me the freedom to otherwise cope during the hustle and bustle of the lead up to the holidays.

I prepared the miniatures with a coat of acrylic gesso as a primer.  While these are part of the Reaper Bones line which can take high pigment / base paints straight on with no dilution, I prefer working with slightly thinned paints.  Acrylic Gesso is a great primer when applied thinly as it tightens as it dries and can be applied by brush. 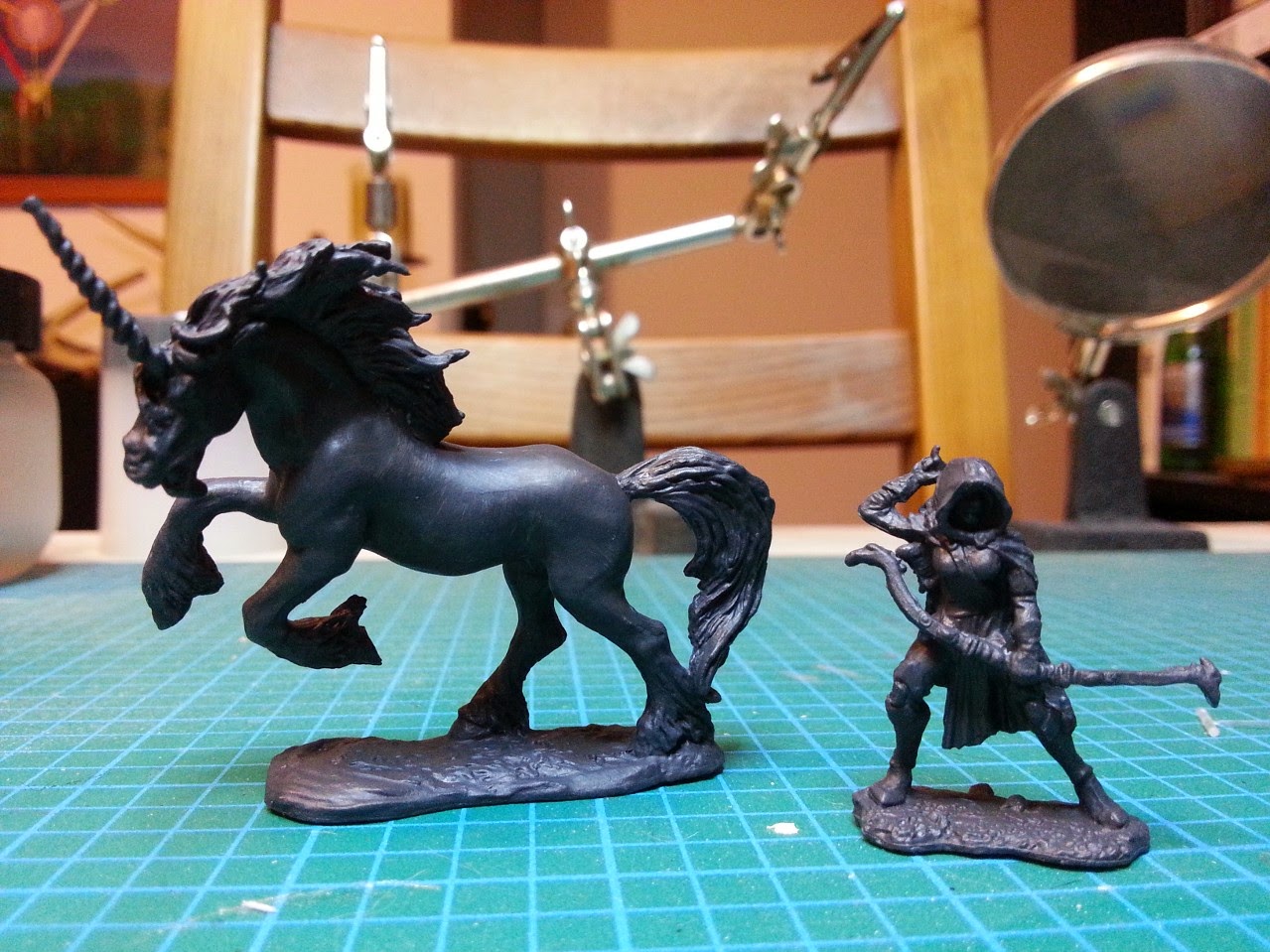 The Unicorn itself was a done with a coat of white (similar to a 'Ceramite White') which I airbrushed on.  I used 'Abaddon Black' for the hooves and 'Caledor Sky' for the eyes.

I followed up with layers of 'Warpfield Grey' and 'Slaanesh Grey' for the, mane, tail and hair at the hooves.  The legs and hooves consisted of me using a wet blending technique to 'transition' from the white legs to the lilac colored hooves.  I used a Wash of 'Druchii Violet' for all the same areas that got these purplish colors.  I then drybrushed these same areas with a layer of 'Lucius Lilac' and then finished the areas off with a layer of 'Praxeti White'.

I also used 'Nuln Oil' on the unicorns white coat which quickly turned the white unicorn to a very dirty white unicorn.  A necessary stage to capture and shade some of the areas where I wanted to showcase some of the details such as the horn.  A liberal drybushing of white afterwards served to 'clean it up' while preserving the details I wanted to show a bit more.  The hooves were lightly drybrushed with the same white afterwards to give it a more natural look.

The Unicorn was a great model to paint and very simple -- a great place to start for those starting to paint in my opinion. 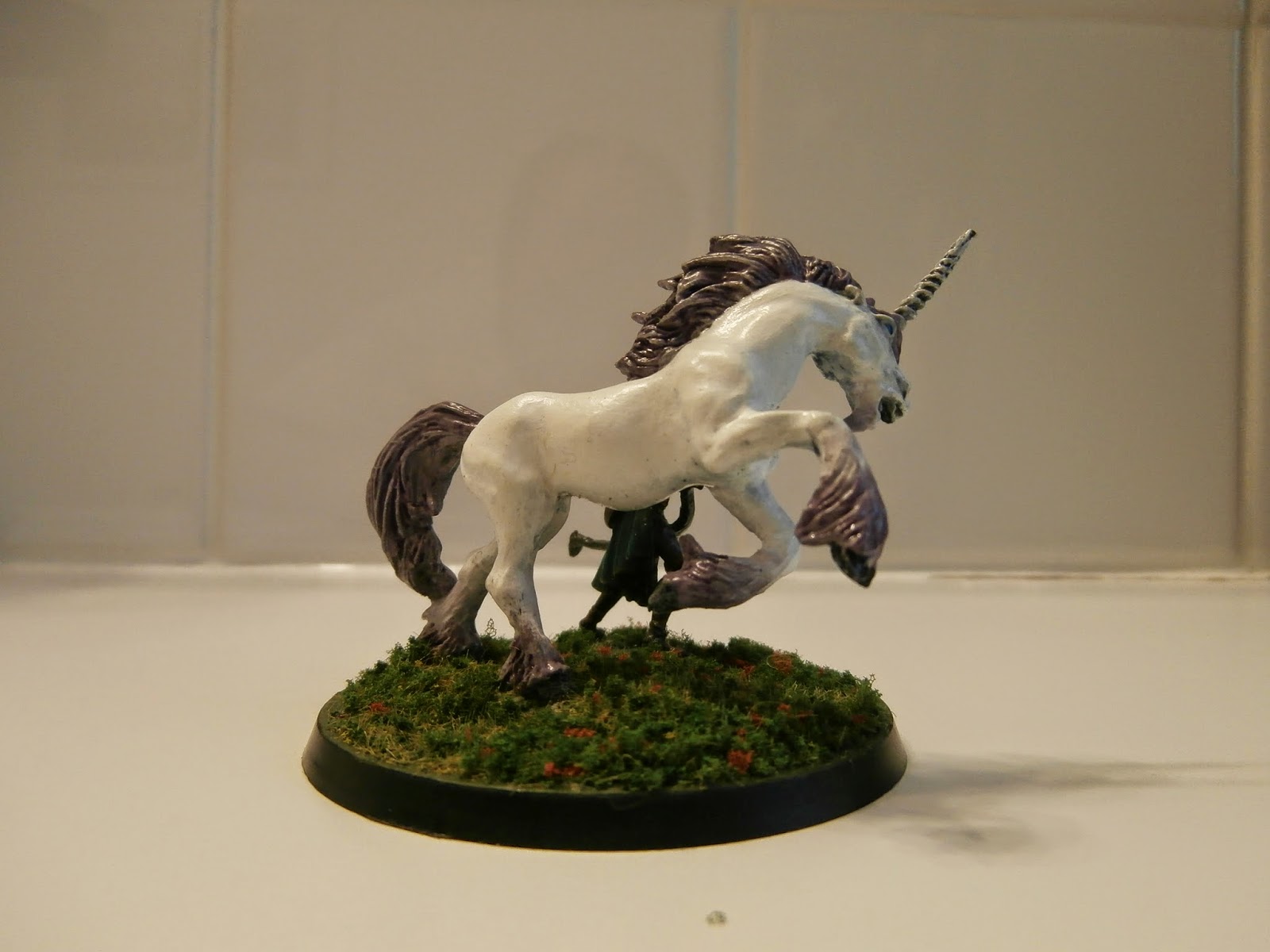 The Ranger on the other hand requires a bit more patience since the size is smaller.  Calling it a ranger is a bit of a misnomer though as the model itself from the Bones line is 'Callie, Female Rogue'.  As an archer and given the look of the model, I think a ranger works just as well.

So, while the Unicorn was airbrushed white, the Ranger was airbrushed green... 'Caliban Green' to be precise.  The rest of the bases were fairly simple here too.  Aside from the cloak, 'Mechanicus Standard Grey' was used for the clothing.  Boots, quiver, and bow all got some brown -- I used 'Rhinox Hide', ' Dryad Bark', and some 'Mournfang Brown' to achieve the results I was going after though for the life of me, I'm not sure which brown largely went to what.  The darkest of the three was used for the bow and the lightest shade was used to drybrush the darker brown items.  The remaining brown paint was what I used for the quiver and boots.

The figure got a shade coat of 'Nuln Oil' from head to toe.

To do the face, I started with 'Rakarth Flesh' and layered with some 'Kislev Flesh'.  I used 'Reikland Fleshshade' as a wash, and used 'Flayed One Flesh' to bring out some of the highlights.  I used 'Mephiston Red' for the lips.

Back to the cloak, I drybrushed some 'Kabalite Green' (a layer paint) and 'Hellion Green' to highlight some of the edges and folds better to go along with the shading the recesses of the cloak already received thanks to the 'Nuln Oil' wash. 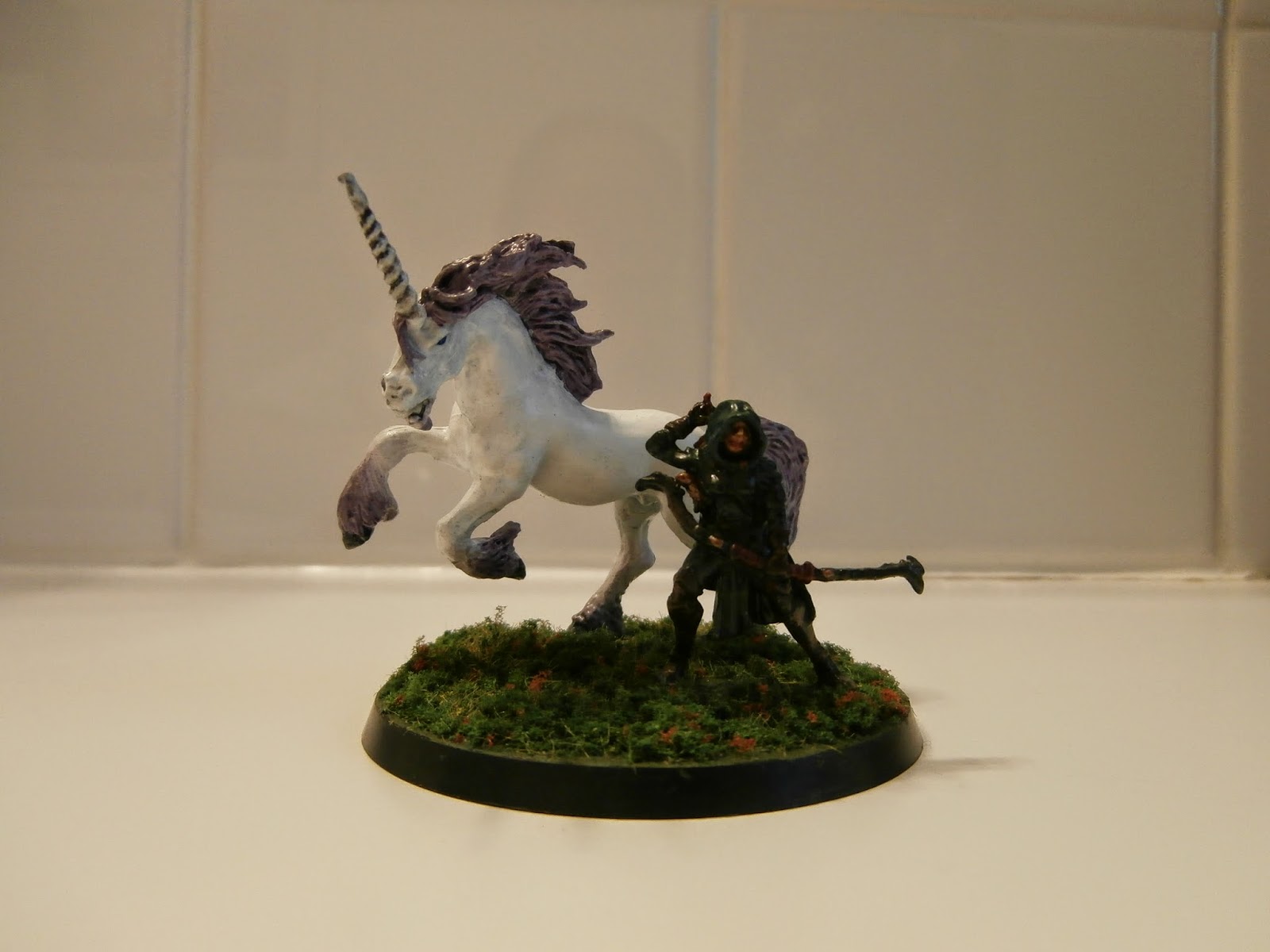 Beyond that, it was just a couple little details. The miniatures were varnished with a mid-glossy varnish which ended up being glossier than I would have liked.

Both miniatures were affixed to a 40mm base and it all got painted over using 'Lustrian Undergrowth' which is a texture for bases that is part of the Citadel line.  Basically, it's a shade of green paint with some 'grit' which makes it possible to shape it a bit which allowed a better transition from the larger base to the smaller bases on the two miniatures.  When dried, using some PVA glue to coat the base, I opted to use some basing supplies from Gale Force 9 -- the Meadow Blend Flock.

All in all, I think it turned out pretty well and it was fun to do.