Kickstart This: Aihrde - An RPG Setting from the Makers of C&C 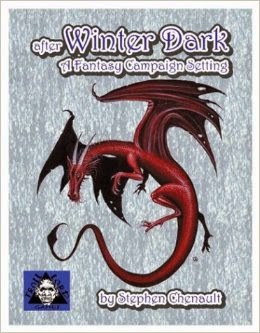 First Kickstarter 'push' from Under Siege in 2015!

I'm not sure if that is something to be proud of but I'm not ashamed about it either.  ;)

Aihrde is the setting that Troll Lord Games originally put our when the company was formed.  At the time it was called 'Erde' and the new spelling reflects a closer and correct pronounciation of the name.  The setting might be better known as the 'After Winter Dark' setting and it was a popular and evocative one.  At 24 pages, the supplement presented some history, cosmology, religion, and the cradle of the world.  It was a concise and minimalist setting but provided a creation myth as well as detailing the rise, and fall of a great evil.  During this reign described as a thousand year rule, the land is described as being in a perpetual winter giving the supplement its name.  However, with the Winter Dark wars and evil being cast out, you were left with a setting that had history but at the same time, wouldn't be difficult to use or start new campaigns in.  It was almost like the classic grey boxed set that TSR released for the Forgotten Realms well before anything else was published for it!

Honestly, I fell in love with the setting -- if only because some of the ideas (the perpetual winter and demise and enslaving of the gods) appealed to me and mirrored ideas I wanted to put forth in my own setting.  The 'After Winter Dark' campaign setting was released in 2000 and a year later, the 'Codex of Erde' was released.  The Codex came in at just over 250 pages and expanded upon the material in the After Winter Dark supplement.  It should be noted that the original supplement was system neutral but the Codex was not and had some of the earliest d20 material that TLG produced.

Then Castles & Crusades happened a few years later and thing began to change for the company.  They moved away from the regular d20 product line and started to focus on other products.  A new 'After Winter's Dark' Folio was released for C&C (despite being largely stat-less) in 2007 and a new, revised Codex was promised.

After an earlier pre-order and now this Kickstarter, this is pretty much in its last lap and the project has grown some.  The Codex is ready to go, maps are ready to go (and they are going to be much bigger), and there is a Player's Guide being prepared with it.  The beauty is that the Codex for the setting has been confirmed to be system-neutral and stat-less!  This is great if you don't care for C&C or rather run a D&D5 campaign or something like Savage Worlds.  On the other hand, the Codex might not be your cup of tea since your DM is looking to pick it up.  The Player's Guide on the other hand could be interesting -- especially is the rumors of racial classes are true if you are playing C&C or something close to it.

In any event, the funding campaign is down to a couple of days and the basic funding goal has already been smashed and a few stretch goals have been kicked in as well.  TLG is very close to getting the Codex in full color though it will need a bit more to get the companion Player's Guide in color as well.  As you've no doubt heard time and time again, every little bit counts and this is your chance to pick up a few other picks (add-ons) if you are so inclined.

While there are a few pledge levels to consider, these are the interesting ones (in my opinion):


Of course, there are more and you should check it out for a better idea and all the add-ons available.  A $1 pledge gives you access to the add-ons.  You can check out the Kickstarter funding campaign HERE.  If you end up pledging, please let me know and feel free to add a note on the comments section on the Kickstarter telling them that I sent you.  ;)