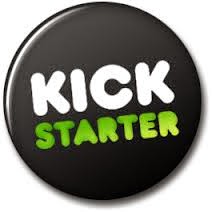 But I'm not going to discuss those.  Rather I'm going to highlight the ones I backed last year and mention a few that I was at least looking at but ultimately didn't back.

After a few disappointments, readers of my blog already know that I've tended to back every single Kickstarter that Troll Lord Games has launched.  I'm loyal to the company and the C&C brand and, most importantly, I have no fear that they will actually deliver what was promised.  Time is a different issue but even this has greatly improved compared to a few years ago.

In the order that the TLG Kickstarter campaigns launched, you have:


I have to date received everything from Codex Nordica and most things from the C&C reprints (still short the CKG and a couple of the bonus items).  The Story Teller's Thesaurus is apparently shipping now and the Amazing Adventures material should be lined up to go to print shortly.  My understanding is that the present Kickstarter has material almost ready to go as well (mentioned HERE) and since these are hardbacks and the hardbacks are outsourced, it's a matter of doing one print run at a time.  The TV pilot is not a TLG project and, honestly, I pledged a token amount.

Other Kickstarters I backed are:


I have received my brushes but the rest of these kickstarters were launched later in the year and two of them (the Dungeon Morphs dice and the Heroic comic book) aren't due till Spring of 2015.  The other Dice campaign was due to ship out in December but I don't think any backer took that seriously.  As of X-Mas, production was due to start (a month of production) and shipping afterwards.  I realistically expect these dice to also ship in Spring but look forward to being surprised.

Kickstarters that I considered but didn't back:

Bethorm: the Plane of Tekumel RPG. Bethorm was a painful thing to pass up.  I really like the Empire of the Petal Throne material but have never played or run it.  This looks to be a nice new version and my original reasons for passing on it was a combination of a tight budget and the simple fact that it was done for a different game system (Pocket Universe).  I'm not saying that it's bad but that it's yet another game system I'm likely never to use.  I decided that my 'pink' copy of Empire of the Petal Throne (Different Worlds edition) will have to do.  ;)

Combat Description Cards for Storytellers and GMs: Cool but not really necessary.  It's another fun gaming aid that would have just collected dust on the shelf.

Pop-Up Miniature Terrain Kit: I really like my miniatures and I liked the look of these but, honesty, I'd use them once -- if that.

Vault of Adepts - 1900: An RPG that sounded right up my alley but failed to capitalize on many aspects promising digital rewards only for rather high pledge prices.  A shame too since it was described as 'Penney Dreadful meets Arkham Horror in this pen and paper RPG of secret societies in 1900 London.  Occult schemes in the age of absinth.'  Awesome and poorly executed.

Designer & Dragons (Evil Hat Productions): This 4 set edition came down to money but it wasn't the cost of the books that deterred me -- it was the cost of shipping to Canada.  I'll be going through my FLGS for these now that the Kickstarter is done and the books are becoming available.  I have the original PDF from Mongoose but would like to have these on my shelf.

Matchstick - The Streaming Stick: I like gadgets but decided that I didn't need ANOTHER gadget in this case.

Worldspinner: Fantasy RPG Worldbuilder & Map Maker: This started looking real cool until I saw some of the size limitations corresponding with the pledge level and subsequent membership fees.  No thank you.

Chill 3rd Edition RPG: A third edition of Chill... again.  Well, the last one never materialized so let's hope this one does.  At first I was excited to see it but really, I decided to skip it.  Already invested enough in Call of Cthulhu for my horror fix.

Polyhedral Dragon Scales: Metal dice which looked awesome... A full set would cost £39.  A bit too pricey so I let it pass.

Flat Plastic Miniatures: These were really awesome but I have tones of three dimensional miniatures already.

Stone Dungeon Tiles: I really kicked myself for letting the Dwarven Forge Game Tiles go and, when this one came up, I looked back and back again.  I chose to let this one go too.  I like the idea of tiles but I also have other things I can use.  Being close to the holidays kind of made it a deal breaker as well.

And there we have it.  There a couple interesting campaigns going on in the new year but I'm carefully considering anything that catches my eye.  I'm expecting many expenses this year as well so I can't be throwing my money away on any good old idea.