When Dungeons & Dragons came about, it greatly popularized polyhedral dice in gaming.  Wargames prior to 1974 had used a variety of different dice when the rules called for it but it is safe to say that D&D created the 'demand'.  Today, we have a variety of dice manufacturers selling dice and gamers seem to just keep on collecting sets to suit their mood, taste, or even games they play.  I love my dice and recently had to buy a larger 'chest' to hold them all.

Over the years, I've played many different RPGs with each system having particular dice needs.  When I need to, I pull some dice that I'll be using and drop them into my dice pouch and, with those and books in hand, I'm ready for adventure.  This could be as simple as a d6 dice pools where I'll need 'buckets full of dice', a standard 'D&D type array', or a bunch of d10's.  I never leave home without a trusty d30 because, d30's are cool.

However, going back a few years ago, I have noticed by time to time a game decides to put in or use some 'special dice'. That isn't to say different polyhedral dice as opposed to the common d6, but rather dice which are numbered differently or use symbols and/or are color coded.  This makes those dice (in the majority of those cases) unique to the game and, much more difficult to replace.  I grudgingly accepted this fact being a gamer with a love of many different games.  The game, Nin-Gonost which failed to take off, had 25 different types of d6's with many ranging from -1 to 10 (some higher).  Obviously the dice had different ranges and served different functions.  Well, maybe not obvious -- a knowledge of the rules is required. 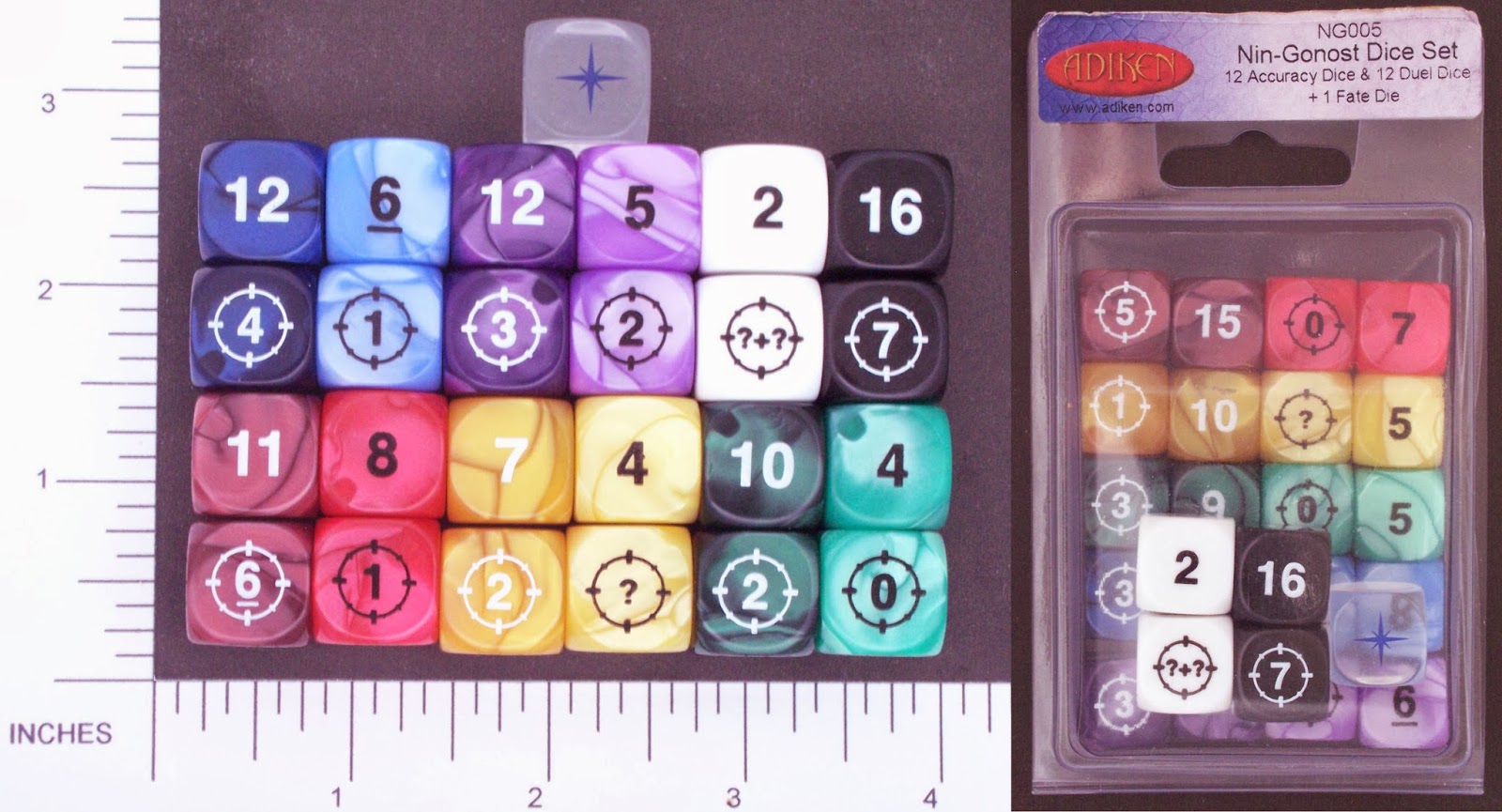 That particular game came out about ten years ago and, it didn't seem to be a huge issue when I look at all the other games I've acquired in the past decade.  Then Fantasy Flight Games acquired the license to publish a new edition of Warhammer Fantasy Roleplay.  The game seemed to use a collection of d6's, d8's, and d10's but they weren't your standard variety. 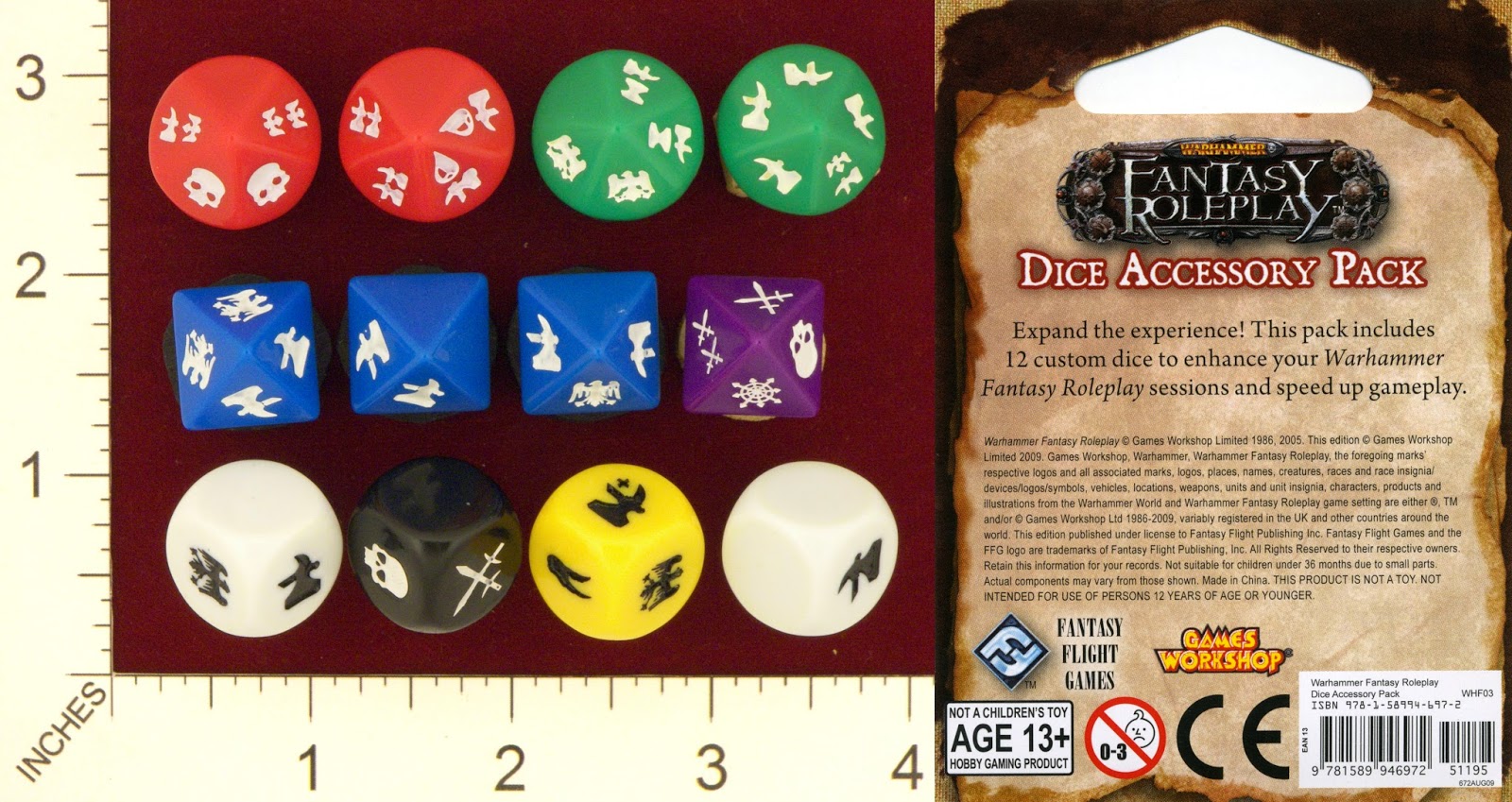 Different symbols for different things and colors also had an importance.  I played the game once but frankly, between the different dice, the counters, and other 'fiddly' bits, I just didn't care for it.  I also didn't pay too much mind to it either since, other games were doing it too.  In the past year, I also got into X-Wing Miniatures which is also produced by Fantasy Flight Games.  There again, special dice.  You get six dice in total in the Starter Box for the game but more dice will come in handy in play. 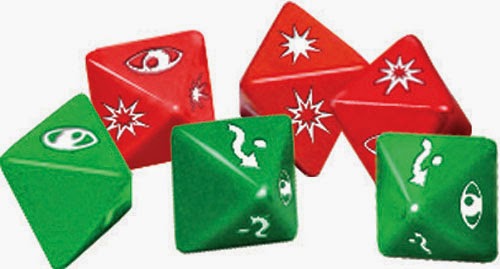 It should be no surprise that, when they put out the Star Wars RPG books like 'Edge of the Empire' and 'Age of Rebellion', they decided to do some special dice for those too.  What annoyed me further was that, despite being in the same fictional universe, they still opted for completely different dice for the role playing game compared to the miniatures game.

And converting them doesn't help much either:

But, there is an app for that, and between all the extra dice the sell for their games that are already selling quite well, some might even think the app to be overly expensive at $5.

I was happy to skip the Warhammer Fantasy Role Play and I did pick up an extra set of dice for Star Wars miniatures.  And, although I am enjoying this newest Star Wars RPG, the dice app was a cheaper alternative and is what I decided to go with for the game I am playing in.  At $5, the app at least has both types of dice and can even be used as a roller for regular polyhedral dice.  However, one of the reasons I have not bought the actual books myself (a friend has the starter sets and books), is because of the 'special dice'.  I have enough dice and I'm sure I'll buy more but I am getting weary of dice for the use of one game system and one game system only.