The Castles & Crusades Black Box is neat little collector's item.  In 2004, Troll Lord Games released a similar collector's item, a white box set to celebrate the 30th anniversary of D&D and a nod the the OD&D white box set.  A thousand copies were printed and the first 300 of those were numbered and signed.  Ten years later, D&D is celebrating it's 40th and C&C is celebrating its 10th.

The set has three booklets and a few cards inside the box along with some sharp looking black dice (orange number on black dice).  The cards include various test logo designs for TLG and a note regarding the box itself.  Like the white box, a thousand were printed and the first 300 are numbered and signed.  Steve and Davis Chenault along with Mac Golden have all signed the cards and, in my case, I have box number 15 of 300.

The booklets in the box are the Adventurer's Backpack, Of Gods & Monsters of Aihrde, and The Golden Familiar.

Most fans of C&C are likely to want to dive into the Adventurer's Backpack and not because it is the first volume of the three booklets.  Years ago, there was rumors of a supplement to help 'hack' the C&C classes and create your own.  This is not that supplement but it wouldn't surprise me if some of that material didn't shape what is in this booklet.  Four interesting and new classes are introduced for your C&C game: the Archer, the Avatar, the Thief, and the Magic-User.

At first glance some people might think, 'What?  Don't we already have the Thief and Magic-User in the Player's Handbook?  What kind of rip-off is this!?'

No, they are not the same though they are similar.

The Archer, as the name implies, is a warrior which specializes in archery with specialized skills and abilities to back up that claim.  If you have a player who still thinks Legolas is the best or has a particular obsession with bows after watching 'Arrow', then maybe this is the class for them.

The Avatar is an embodiment of a deity in the mortal realm -- a being which has been imbued in part by the deity they are representing.  It's an interesting concept and the closest equivalent would be a Cleric or Paladin.  They cast spells through the use of mana points which regenerates but need not prepare any spells in order to cast them.  They also have abilities of Deific Voice and Presence on top of the Spells they can cast.

The Thief in many ways is similar to to Rogue but the class is certainly more fitted to an urban setting.  They can Case targets, are great at Close Quarter Fighting, Blending withing a crowd, and has a gift in the art of Distraction and Spinning a tale.  This is in addition to being to pick a pocket or picking a lock and other useful skills for this unlawful profession.

The Magic-User is not, as some would assume by the name, a spell caster.  They have natural abilities to Detect, Read, Use, Locate, Identify, and Create all type of magic items but not actually cast spells.  They can also transfer magical properties from one object to another.  A very interesting class.

The rest of the booklet gives several 'backpacks' of gear... essentially pregenerated inventory lists for characters and some new spells.

Volume 2 of the set details more of the gods and monsters in the Aihrde setting which gives us a glance at some of the stuff to be found in the new Codex of Aihrde due out in 2015.  Hardly any stat-related material -- most is 'fluff' and system neutral.  A nice read overall.

Volume 3 is an adventure and this was previously made available as part of the original set of CK Screens that TLG published a few years back and is currently available from RPGNow!  I don't think the text has changed any but the layout is improved in the sense that localized maps are included throughout the booklet relevant to the section in addition to the overall map. 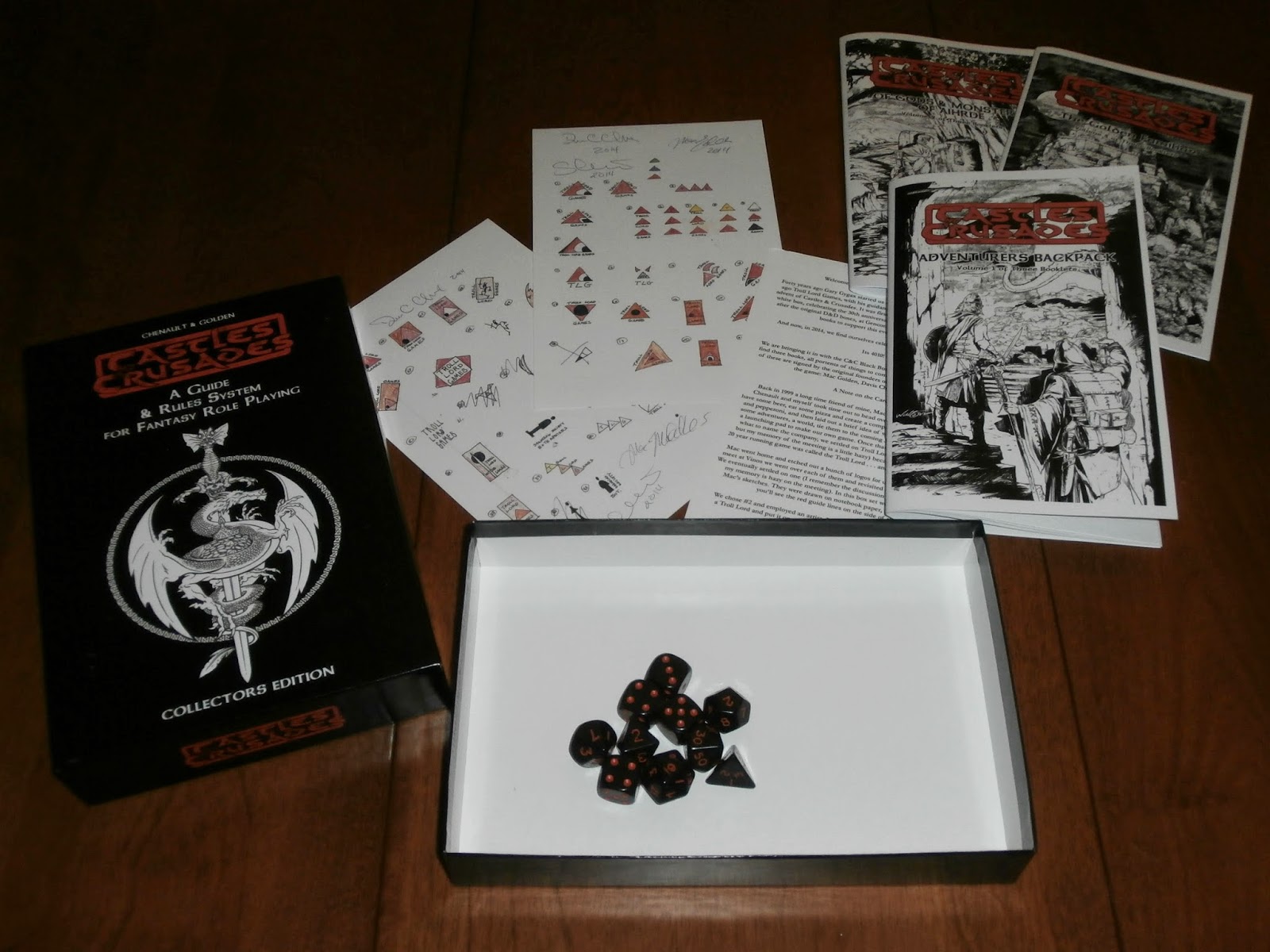 The boxed set is a nice addition but hardly a necessary one.  It's a great little collector's item that looks good on the shelf as a digest sized boxed set.  However, with the release of the Codex and the with the Golden Familiar having been available for a few years, the allure for some just won't be enough.  If the Adventurer's Backpack ever sees the light of day, we may see some of the contents in the first booklet re-purposed as well which really makes this a great preview of some of the things to come.  But, given the price, I still say it's a worthwhile purchase.  The original printing of the Golden Familiar is no longer in print and the four new classes introduced are interesting enough in their own right.  At $30, it's not a bad deal and the box set looks great in black.