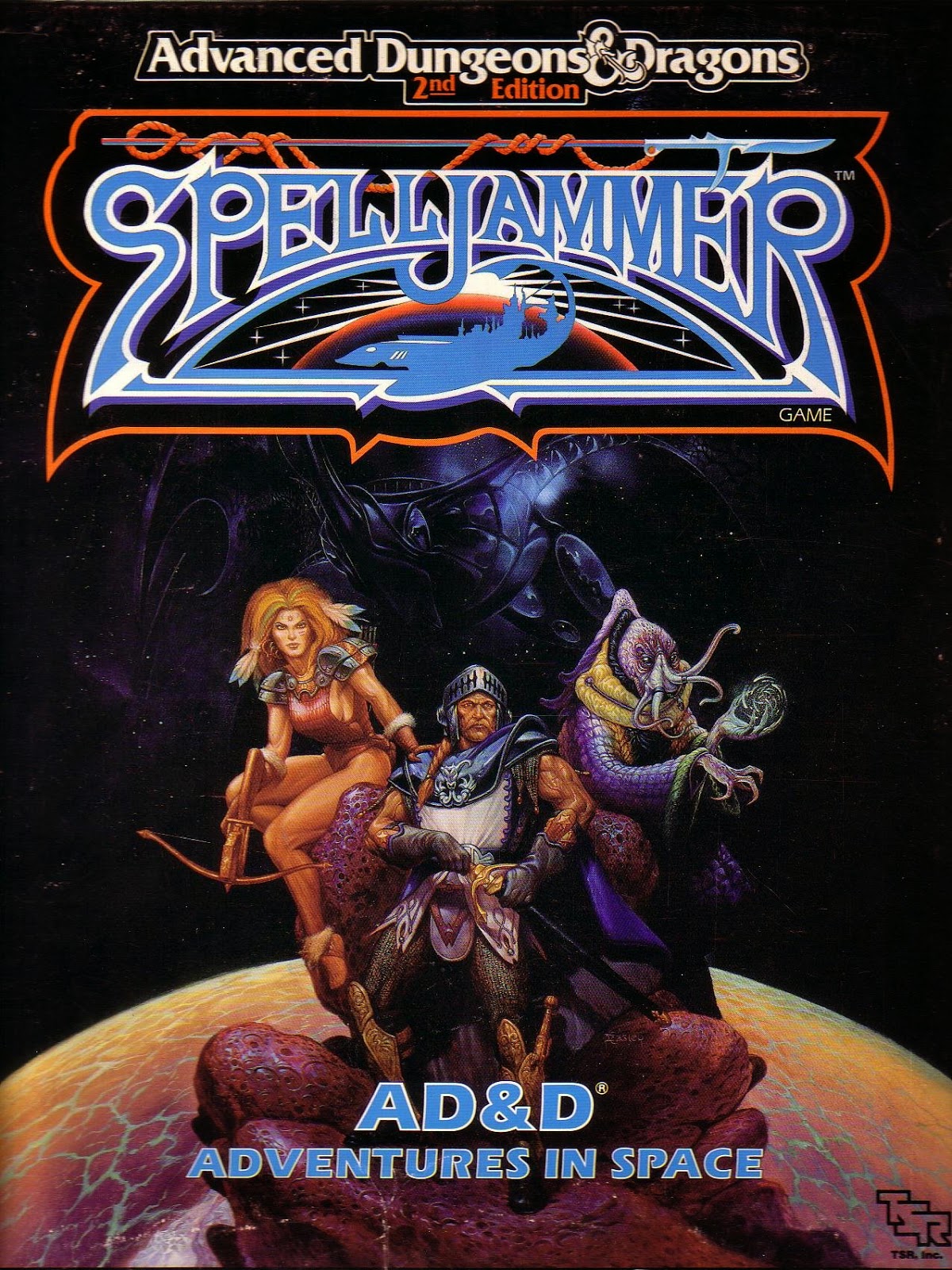 With Second Edition came an never ending expansion of settings, supplements, and other types of cash grabs in TSR's ongoing attempt to grow and make increasing amounts of money.  Ravenloft, which was initially a couple of modules became it's own setting, and other settings like Darksun, and Al-Qadim were also introduced.  And then there was Spelljammer.

I never liked Dark Sun probably because of psionics.  My attitude with Ravenloft was pretty much neutral and failed to capture my attention the way that either of the first edition modules did. I never needed an expansion of the planes that Planescape brought about ... I was already fine with the established nature of the planes, my devils, demons, and angelic beings as set about in First Edition through books like the Manual of the Planes and other tidbits of information I came across in the game up to that point.  Spelljammer was just different and had a special kind of appeal to me.

It's hard to explain.  I mean, on the one side, some of it... no.... A LOT of it is silly.  Forget notions of physics as we know it because it won't work.  At best, it had it's own peculiar logic about things.  However, the world could be spherical, flat, of hell... it could be a cube.  It could be on the back of some sort of space turtle or just be a sphere fixed in space.  This 'space' surrounded a world and, when you left the atmosphere, a bubble of atmosphere came along with you.  This world and space around it was encased in a bubble of it's own or, rather, a crystal sphere.  There were many crystal spheres and each had their own worlds withing them.  These crystal spheres 'floating' in some sort of sea of 'phlogistum' which, if memory serves, was also very flammable.  If it wasn't, I ran it that way because I guess I was also sadistic back then.

It was also a convenient excuse to have setting crossovers.  Someone from the Forgotten Realms could adventure in Dragonlance and then take a trip to where ever your imagination takes you.  It was an easy way for a DM to run a completely different campaign with the same characters.  Spelljammer could be anything and everything PLUS the kitchen sink.  Perhaps this was the biggest problem.  When I started playing AD&D, the new Second Edition books were among my first book purchases for AD&D.  I had plenty of First Edition material and as TSR kept on publishing, my gaming collection also grew.  In many ways, I was fortunate because we had a large enough pool of players to warrant three full time DMs.  As DMs, we also all specialized: one of us ran his own setting which was, at least, partially inspired from Greyhawk, another ran Dragonlance, and I ran the Forgotten Realms (I loved the original grey box set! and the first in a series of accessories that began with Waterdeep)..  We all ran and played in each others games along with a bunch of other players that played in all those other games as well.  I was new enough to the game that I really liked all of it so when Spelljammer came out, I was immediately drawn to it because it was also different.  It retained what I liked about AD&D and just put it... 'out there'.  Others seemed to genuinely dislike the potential for crossovers and there was perhaps too much reliance on the established settings in TSR's portfolio instead of strengthening the idea of a new setting.  For me, I didn't care at the time and I knew I had to have it.

When I picked up the box set and checked out the components and books, I pretty much fell in love with it because it had fun with a few AD&D concepts... Mind Flayers in space just makes so much bloody sense!  Tinker Gnomes possibly creating explosive havoc? HELL YES!  But having cards of really cool looking vessels with deck plans on the reverse... a tactical map and fold up miniatures of the ships to do ship-to-ship battles made it that much more awesome.  I was also 14 at the time.

It's interesting that up to that point and for years afterwards, I never used any sort of miniatures or battle map (aside from maybe a quick sketch of the area prior to the start of a fight), except when it came to the ship battles in Spelljammer.  I think that just 'elevated' the game somehow to another level of play.  Or maybe my love for things like Star Trek crossing over into my love of fantasy game was clearly coloring my judgement. 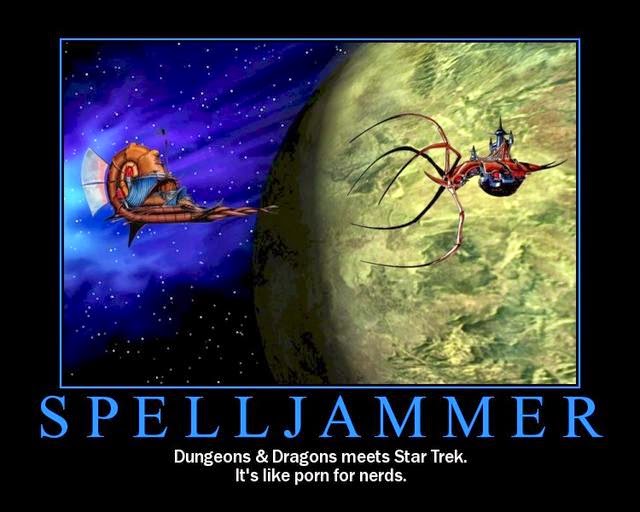 The set also contained a couple of books describing rules of play in this fantasy version of space along with equipment, ships, and combat between them.  Races and the like are also covered and the concepts introduced are explained in detail but not to a point where a reader coming to this box set with an AD&D background would be lost.  The book layout was also quite  nice and delivered much information in sidebars in the books as a quick way to deliver bits of relevant information.  It was a good box set that delivered a lot of value for the price at the time.

I ran a brief but very successful campaign in the Spelljammer universe and collected much when I could.  Then it got discontinued and things became a lot harder to find for me.  I eventually sold my lot of Spelljammer material to a friend who promised to start up a campaign.  He never did.  Selling that stuff off became something of a regret so, I did go and track down a couple of key things about 4 or 5 years back.  Notably the original Spelljammer boxed set, the 'Lost Ships' accessory, and the 'Complete Spacefarer's Handbook'.  It is still a nice setting, and it came at a time when TSR had almost stopped putting out original and creative material.  Maybe if it was a bit more creative and not chained to established settings, it might have thrived a bit more.  Or perhaps not.  There retains a following... there were some Third Edition conversions for it and some fan stuff for Fourth Edition as well.  It's probably that we will never see the like of Spelljammer in Fifth Edition and I think it's because Spelljammer was always niche within a niche hobby..

Of course, it always nice to pull out Spelljammer on an unsuspecting group of players.  They won't know what hit them.  While out-of-print, the Spelljammer boxed set is available on RPGNow over HERE for a very reasonable price of $9.95 and I do recommend it very much.